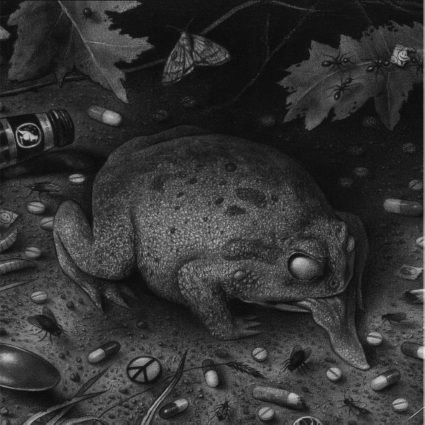 This Norse band plays a blend of psychedelic folk and European jam rock that is a few shades darker than what comes out of the States, and is dosed up with the spirit of the 60's. They are almost  a little too upbeat in the opener, but make up for this in the second song. The vocals keep a brisk cadence that dances around the instrumentation.  The chorus on this one rocks out a little more.The Hungarian funk can be felt on this one as the bass player gets down. The simmer down into the more ritualistic march of "When Traveling From Us" . There is still groove to it the mood just grows more somber. This is the first song I can really hear appealing to the more metal minded, as it's heavy from an emotive state. There is more of a 60s feel to the title track that finds the organ winding it's way around the jazz like gallop the song builds into .  This is the first moment that really strikes me as being proggy.

" Spurvehauken" finds flute and piano as the dominant instruments.  This gives a slight Jethro Tull vibe to the song, but not in the "Aqualung" manner that might come to mind with this reference, but in some of Ian Anderson's more brooding moments. "Nordmarka" finds their singer taking on more of a croon. This song has a more dynamic ebb and flow than  most of their songs that work off of grooving along to the boogie of the bass and key boards. Their singer stays in a lower mellowed out tenor, he accents the break down in more of a rhythmic fashion and the bass playing is really impressive in this turn the songs takes."Vinterblot" finds the funk taking over with the band veering off into a more disco direction. I don't mind this as I grew up a big fan of disco era Kiss. The groove is in the heart here and that carries the song even with all the weird synths that ride this one.

These guys have a weird and wonderful sound that skips and dances into places that I'm willing to bet most of the other artists in your iPod don't venture into, the closest I have in mine is Hexvessel. I'll give this one a 9 and see how it sits with me. Not the darkest folk I''ve heard , but then it again it's more than just neo-folk. Svart Records drops this in March.