Master : "An Epiphany of Hate" 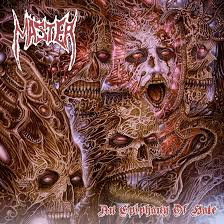 In need of some old school classic 90's sounding death metal, I jumped at the chance to give this album a shot , even though back in their hey day, I never really listened to these guys. The first thought that hit me is they sound like a faster version of Obituary. This is in part due to the gnarly but decipherable growl of bassist and sole founding member Paul Speckmann. Speckmann comes from a time when no matter how heavy you are trying to be at the end of the day it becomes all about songs . This is the case even when his growl takes on a more garbled sound that is an dynamic effect in and of itself on "Fiction Soon Becomes Reality" . It doesn't have a big chorus and the punk roots of this kind of music are evident in the drumming. The snare sound on this album could have been lifted from any of the early death metal albums that came out of Tampa in the late 80s. The echoes of thrash, death metals closest cousin can be found in "Face Your Fear". Though the song itself is not as engaging as the first two.

"Just Be Your Self" brings the bands Slayer influence to the surface. This is over course early Slayer they pull from, even pre- "Reign in Blood". "Just Take My Right Arm" dives back into more straight ahead classic sounding death metal. This album is not going head to head with "Altars of Madness" or even "Heartwork" as it begins to lose it's moment at the midway point. Slayer's influence on death metal as a whole is felt once again on the title track. Today's crop of death metal bands could learn from this band that your vocals do not always have to have the same cookie monster growl to them that every other death metal band has. "It's Clearly Eden" doesn't break any new ground for these guys , but isn't half bad either. The lyrics are pretty relevant. They get a little darker on " the People of the Damned" which are what they children of the damned become when they grow up. The pace picks up for this one and when they start adding up the bpms , it blurs together.

There is a catchier mosh groove to "Senses All Will Be Controlled". It maintains it brisk stampede,  but doesn't expand upon it.They scrape up a thicker grime covered groove on "Red Alert". This might not be the most dynamic death metal album of the year, but these guys certainly have engraved their own thing over the years despite sometimes having their influences on their sleeves , compared to the bulk of death metal coming out, the unique vocal delivery, socially conscious lyrics and the torch burning from the era that came from burns bright enough for me to round this up to an 8.