lovelesslust : " And Her Actions Failed To Matter" 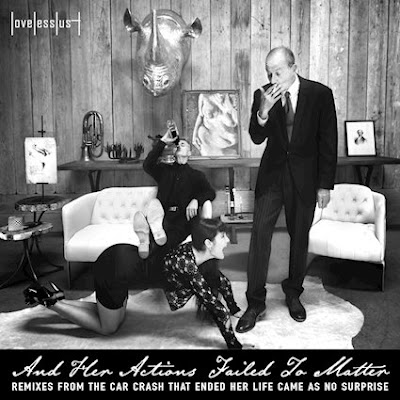 Here is another attempt to find music to get me ready for Halloween. This time it's an album of remixes from a darker electronic act. Since I have never heard them them and well aware sometimes remixes sound better than the original I am just going with what I am presented here. It falls some where between William Control and Mindless Self Indulgence. Two acts I like so that is a good start.The vocals are harmonized and double tracked.Chris Corner from the Sneaker Pimps remixes the first song.  The bass line is strong in a bouncy Marilyn Manson kinda way. The drummer of Depeche Mode takes a shot at "Heavens Black and White". It makes sense that these guys are from LA as this is the musical equivalent of the kinda name dropping that goes on there. This song is more vocal focused by not as interesting and the vocals kinda form a plastic coated drone until the disco beat comes in.

So far my favorite song was "Lowlife Novelties" that was remixed by Aesthetic Perfection. It has a touch of sleaze to it. The most impressive however is what they do with Jay Gordon of Orgy on the song "Pristine" . This doesn't feel like re-read edm posing as dark wave. The beats are pretty innovative and the vocals are mixed further back him them. It's also when the female vocals comes in even just for a few words that it gives them a sexier sound.This creates almost a hip hop feel and it is also interesting how far back they mixed what sounds to be the original tracks.

These guys have peaked my interest in them with this. I am not sure this is something I feel the need to have in my iPod at present.I'll give this a 8.5 Looking for some mainstream sounding goth influenced alternative rock tinged edm and are a fan of any of the bands involved in remixing this album then it is going to be up your dark alley.