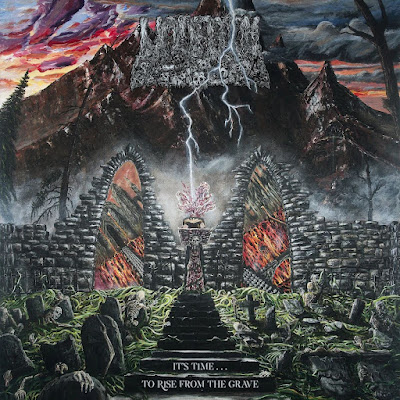 For all the hype surrounded this band that has been heralded as the future of death metal they seem to owe a great deal to Cannibal Corpse. While I try to avoid getting entrenched in a band's politics and try to allow the music to do all the talking, there is not escaping the shift laced facts here when it comes to how the band's front man  Alex Jones clapped back at Chris Barnes, who disparaged the death metal round table Jones was part of.  Jones called Barnes' whose vocal style he emulates a curmudgeon and called him a ghoulish anti-vaxxer saying that if Barnes had not aligned himself with those views, he would have been a respected member of the death metal community. Which pretty much proves Barne's pointed, after all why would anyone in a death metal band not worship death and celebrate it? Three songs into this band's album and it is clear to see Jones is only trying to go with the herd and distance himself from the man he is imitating.

"Rise from the Grave" might have some impressive guitar playing on it, but as a whole their sound does little to solidify their own identity. It is not to say while following the Cannibal Corpse blueprint they are not able to write some decent songs as "Necrobionics" proves this. Then by "Enhancing the Dead" all the song begin to sound the same as it is a blur of color by number stock Cannibal Corpse riffs. "the Funeral Within" does nothing to shift this. While death metal can be monochrome in it's uniform aggression , they have already proven themselves capable of leaning into the groove with "Necrobionics" , so did they just strike it lucky the one time and are unable to be more consistent songwriters. They try to combat this by getting more aggressive and it does nothing to make their songs any more interesting only making them sound like Cannibal Corpses warmed up leftovers.

I typically even prefer the more recent Cannibal Corpse albums to what is going down here the last two songs, are heavy yes, and these guys are polished at what they do but not enough to earn the hype they have received. "Bone Wrought" is less about the groove and more about just being brutal for the sake of it. Similar could be said for the last song but it is a little angrier, when they get more deliberate it fall into place. Sure the guitar solos are great but do they head up against Cannabis Corpses. Not well I will give this album a 7.5, it doesn't suck , but is far from album of the year status.