Famyne : "II: The Ground Below" 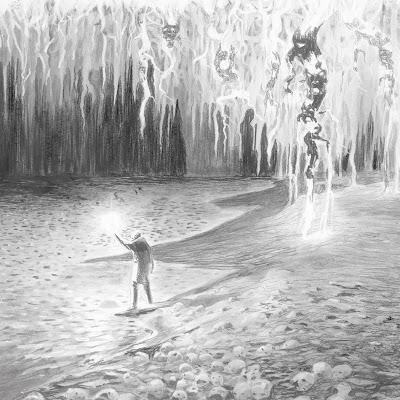 While you can hear echoes of Candlemass in lead singer Tom Vane's delivery, they have carved their own dark doomy place out with the impressive sonics here. The grungy touches that reach out from the 90s claim "Solid Earth", giving it almost more of a hard rock feel despite the pounding the drums and the guitar team up to bring. The moments like the droning simmer of "Gone" that find this band stepping away from the confines of the genre and taking things in a more sonic direction that I deeply appreciate. They continue down a less travelled path with "A Submarine" which might come closer to Katatonia sonically than doom. It has a hazy wandering feel. The powerful wail of his vocals adding to the dynamic swell the song builds into.
"Babylon" lurches with a heavier crunch that recalls more traditional doom, with the band really worshipping at the altar of Black Sabbath. Midway into it ebbs down to a more broken-down take on the verse where the bass holds things down before the guitar teases a solo. Vane's vocals grow more dramatic and his vibrato, warbles with more force as the album carries on. "Once More" makes me think of what it might have sounded like if the Scorpions decided to right a goth song in the late 80s . Which while heavier would have tipped the scales for this album in a more metallic direction, I am fine with goth Scorpions. Sure there is grunge influence to this album, but what I appreciate it there is never a moment where it sounds like Alice In Chains.
They do return with the more metallic crunch I was waiting for on 'the Ai" . It moves with more groove than what you might expect from doom, though it is closer to traditional doom if you think of the sound in terms of a band like Trouble/. there is a great deal of hook to the riff's swagger which is also welcomed and makes this one of the album's best songs. The last song, also works off a heavy dynamic which is more hypnotic than the previous though equally effective for what they are doing here. It has a darker vibe to it for sure. I will go ahead and round this up to a 10 and see how it sits with me, so far it has earned a great deal of repeat listens and if you are looking for new doom, but wat something more upbeat than say Mournful Congregation then this should work for you.
Posted by Wilcifer at 7:42 AM