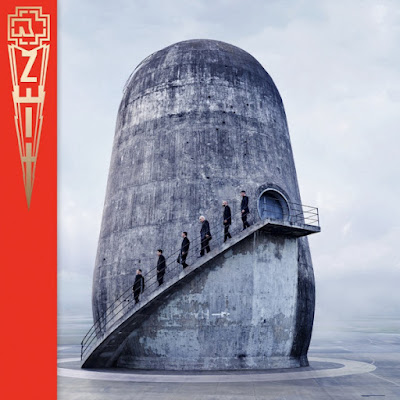 The band's 8th album came about as a result of their touring being cancelled due to the pandemic. The 9bum opens with synths overpowering guitars in the mix, which I can appreciate due to the fact that it is not the band just rehashing the classics. The title track is a dramatic power ballad which works well enough, I prefer the first song as this one follows a safe formula. There is a less ballad like feel to "Schwarz". It is not until "Giftig" that follow that is band is back in a direction with more in common with their harder driving classic sound that could be defined as industrial, where the two previous songs might have more in common with VNV Nation.

"Zick Zack" fins the band back in a more comfortable groove. The guitar reminds me more of Megadeth's "Symphony of Destruction".  The vocals are more sung in the chorus, which I prefer over his more typical almost spoken narrative. Not unlike the tone of the singles from their previous album "OK" flirts closely with mainstream rock n roll, though through a filter of Liabach.  After this they go into an introspective moment full of teenage girl drama that feels more like Evanescence, but his purr keeps things marginally darker. It is not until the predictably named "Angst' that the guitars are crunching down with more menace.

Then things take an odd turn with the feel of a 1940s marching band during a press clip brightens up the edges of "Dicke Titten". It is out to rock more often than not which with these guys is all I am asking for here if we can keep the pianos out o the studio that would be great. "Lagen" took a couple listens to grow on me while it does work off a more subdued dynamic, I love what they do with the vocal effects on this one. I f I had to guess and not check the credits on Wiki, my best would be on a pop producer from Europe was on the board. But no, it's Olsen who they have worked with before. This album is more polished, the last song is what it might sound like if Disney made an animated musical about Nazis being the good guys in another reality. I will give it a 9.5, and see how it sits with me, these guys are total pros, so I was pretty sure they were not going to just put out garbage and they have stuck to their standard though perhaps more sentimental.