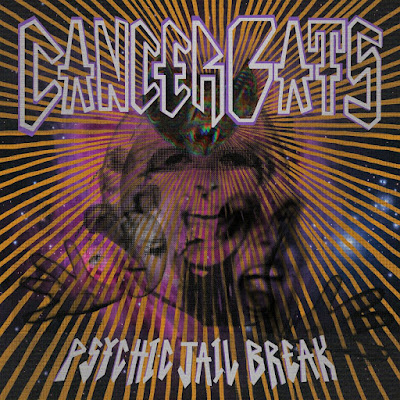 One of those hard-core bands that I assumed were more rock n roll than they were, the opening track is pretty mean. They are not just hitting you with hyper aggression and break downs so if that is what your idea of hard core is, then they might not live up to it, but they are burly enough to fit into my broader definition of punk. There is a touch of their more metal side that comes out on "the Hoof:" though the verses are pretty solidly punk. The fist fledged commitment to rock n roll rather than hard core comes with "Lonely Bong" that reminds me of a cross between Clutch and Gwar. I like how he gets close to singing while still maintaining his raging yowl.

"Friday Night" continues to find the band busting out rippers. "Hammering On" is more deliberate and just a better song. Is there more of bluesy doom vibe? Yes, so that might explain why it is my favorite song so far. While it is rowdy and full of energy the song "Crocodiles" doesn't resonate as strongly with me and sounds like and explosion more than something I would return to repeatedly. The spit fire vocals continue a pretty relentless attack though the guitars are more well planned on " Shadow of Mercury". Lyrically I appreciate it as an ode to chaos.  The rallying cry of not letting the bastards win on "Keep On Breathing" doesn't resonate as much with me, as I am not keen on punk rock pep rallies and want chaos and destruction.

"Pressure Mind" is very in your face punk with the sonic balls of metal. This is perhaps where the genres collide, when it comes to the attack of the guitar. The guitar grooves all of the abrasion away. This is where the rock influence comes in. While explosive in the dynamic shift there is a more understated tension on the verses, making this song more effective than the just in your face all the time tunes on here. While it slows to a more deliberate chorus, the last song rages more than not with a juggernaut assault of guitar. There are some cool riffs, but ya know the rule here is cool riffs alone does not a good song make. Even with that said, these guys are great at what they do and most of the song are heavy and catchy so I will give this one a 9