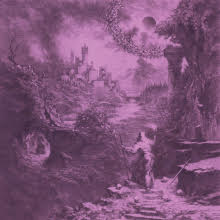 Right from the first song you can tell more love was put into the production of this album than the rawer more punk vibes of their previous work. Despite the more atmospheric darkness teased on the intro piece, it is back to more thrashing and coarsely barked vocals. They seem to care about the vocal placement more though they still remind me of Possessed in this regard.  They recorded this analog to tape which contributes to the organic warmth but have a bigger and more polished sound overall. I think it owes more to thrash than black metal.  "Vigor of Evil" attempts a guitar melody that sounds like bag pipes, it is rawer and more straight forward in the feral nature of the attack here,

"Acid Black Mass" finds them reverting more to their old punk ways and the results are not as interesting. They back off from the overt metallic attack with "Abyss In Vision"  it has more of a post - punk groove. Kind of drones but is more interesting than when they are more punk. But since they leave it as an instrumental it makes me wonder about their potential for melody. The guitars pull of early Iron Maiden like harmonies better on "Shrines in Cinder" there are spoken vocals at one point but the momentum of the song has already carried it away. The bits on less punk guitar thrown into "Funerary Gyre" give another color to the chaos t hat ensues

The guitars create a darker mood going into " Precious Blood of Christ Rebuked". Bui once they get into the verse of the song and the vocals come in it goes back to sounding like everything else they have done on this album. here is a cool riffs that emerges, but the rule around here is cool riffs alone do no a good song make, I might have dug these guys more as a teenager , but I ask a little more of music now. They do bring a little more to the table for the last song which is also the albums best as it integrates more of the death rock sounds they have been toying with while still rooted in a metal gallop.  I will give this an 8.5 , as they have matured  and is more than just wanting to be Venom thanks to the darker urges propelling some of the songs.