Mournful Congregation: " The Exuviae of Gods - Part I" 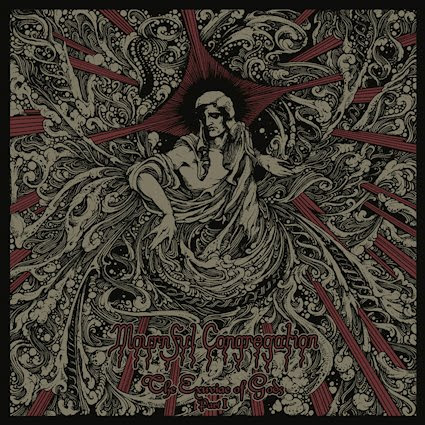 First it should be known this Australian band is one of if not the best funeral doom bands. In saying that it means my expectations are high.  What I hope for was a new full-length album, since it has been four years since their last release. The reality I am facing is that this is the first of a two-part series of EPS. We are getting three songs. One of these being a reworking of a song from their 1995, demo tape. Which considering that was 27 years ago makes this for all practical purposes a new song. The next part which is something I have come to accept with these guys is that the first song is fourteen minutes long and the last is almost sixteen. With this genre of music these lengths are easier to swallow as they are playing at such a slower tempo the drone is in the hesitation. Any band that is not funeral doom and writing sixteen-minute songs, I would take as overindulgence or too sprawling.

The first song feels like a step backwards if we consider where they left off. It was their "Book of Kings" album that made me a fan and it was sonically heavy as much as it was metal heavy. Here it almost feels like sluggish death doom as all of the metal trappings used by so many other bands are all in play. Where they win out at the end of the day is that they are great musicians who breathe new life into what would otherwise just be super slow death metal, with some melancholy to. On the last song, there is more of a ebb and flow rather than a steady stream of heavy, which gives it more of a doom feel, however on the first song I think it is written in a way that allows the guitar to shine more.

With three songs I am surprised to find the title track is a rather mellow instrumental, played any other way it would be more of a interlude rather than a free standing work of it's own. Yet in the seven minutes dedicated to this they unfold some pretty stunning guitar work. I might have preferred this to have been part of a song with vocals but for what it is it works well. The last song which is from 1995, it is amazing that they were playing this sort of thing , back then as the 90s were not the best time for doom, sure it existed and you have bands like My Dying Bride and Paradise Lost defending the faith but for the most part it was a more Sabbath infused genre. The vocals were more low and spoken bringing Evoken to mind. As a whole this is great but not a perfect effort for them, I will give it a 9 as they have done better , but even just waking up from their 4 year break to crank this out is still more impressive than what most doom bands will do.