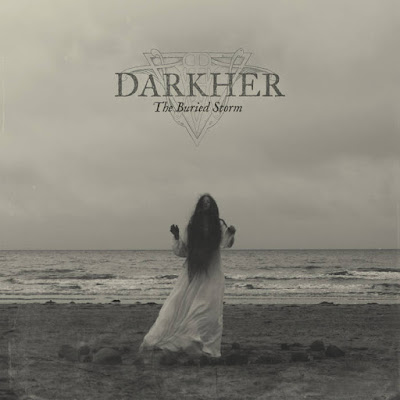 Not our first dance with this British songstress When this trend started a year ago it was fresh, dark folk heavy on atmosphere. Now there are a dozen of them. That is a conservative guess. The main problem, which I had with the previous alum is how much she sounds like Chelsea Wolfe. The sounds she summons are impressive enough to hold back complaints on the opening track, but when it comes to the whole album it is dependent on how much of her, we really hear and how much of her Chelsea Wolfe tribute we get. However, the first two songs running together is not a good sign as it means the sound is too uniform no matter how doomy they get.  The more folk side and less doomy side might be her best bet. "Unbound" kind of gets blow away by a light breeze.

She executes more clearly on "Where the Devil Waits" but this also finds her more in Wolfe mode. To some extent she powers through and coasts her songs over on atmosphere so thick you forget about other comparisons that night be drawn. "The Seas" is such a fragile song it is almost not there due to it's dreamy atmosphere. I do think it was a smart move to lean into the string section, If I was here I would be doing everything in my power to distance myself from the Chelsea Wolfe sound, the way this album is produced doesn't lend it self to this goal.

"Immortals " is aided by the songs' emotional urgency. There are things song writing wise that separates her from Chelsea Wolfe. The lyrics are pretty strong to this one as well. It might be the album's best track, when she leans more into a post rock drone and less of a doom thing there is more of an original sound.  The last song buzzes with tension, but does not really go anywhere, Sonically this album is an improvement and shows growth , but I am stull going round this down to an 8 as  it bears too much that sounds like well if you made it this far into the review you know what i am doing to say