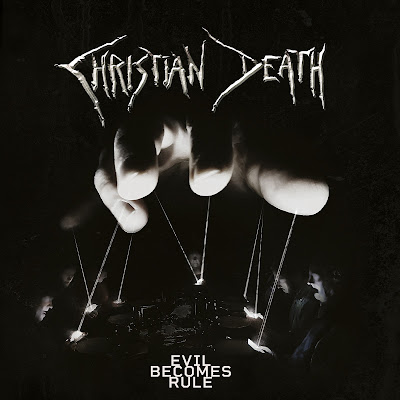 The band's 15th album, I like the Valor albums and I like the Rozz albums I think Valor has carried the spirit of what the band was doing over the years. They continue to move in a less punk more metallic and darker direction, though it wonderfully melodic and there is an excellent choice in sonic colors on "New Messiah". I often talk about how darkness is heavy and a case in point for that is heard on the song "Elegant Sleeping" . The song transitions into some with a more punk tinged mood to it. I tis also the first with Maitri taking over the vocals. "Blood Moon" follows the tried and true goth rock formula of a bass line carrying the song with guitars as atmosphere creating a backdrop for the vocals and then expanding at the chorus, it proves to be once again effective here.
"Abraxas We Are" is the first song that I feel is not as effective, in some part due to the production of the guitars, but it still might grow on me, the chorus works when they give more of a refrain, there are just sections of guitar that could sound more flowing. Perhaps I am nitpicking a bit, but since they are one of my favorite bands that means they are held under greater scrutiny rather than given a pass. I like the use of sample on the album .  "the Warning " is more driving. The drummer on it might be the albums best , as it is one of the heavier songs so far.  It is not surprising "Beautiful" was one of the lead singles as it is one of the more accessible songs by far , though it is very well written.
They continue to stay true to who they are with the creepy pacing of the lingering bass plod powering "Rise and Shine". They indulge themselves in a more lingering creepiness before eases into the title track. The equally dark " Who I Am?" is brooding and foreboding.  The bass tones on this album are great but, on this song, go above and beyond. This is followed by an outro, which is more sound than song. O will round this up to a 10 as all I really need from these guys are good songs that are dark and true to who they are and they have succeeded on that front for sure. This album is being released on Season of Mist.
Posted by Wilcifer at 7:51 AM