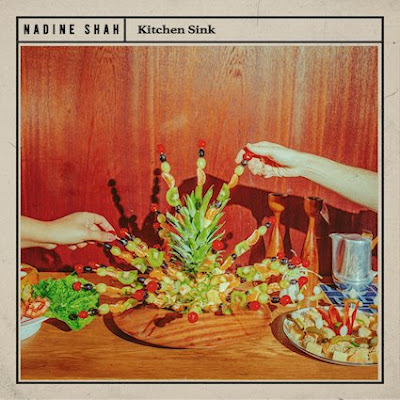 I have been a fan of Shah for sometime. This is the 3rd album by her which I have covered. This one is a little more upbeat and a little less post-punk. It has a afro cuban beat and slinky bass line. Her husky alto is allowed to slither between the grooves in interesting ways that are out side of the pop box. There is more of a quirky feel that recalls her earlier work on "Ladies For Babies Ghosts For Love". The David Bowie like funk of "Buckfast" is more pleasing to my ears.Think "Fame" here. There is more of a 70s jazz fusion thing going on with "Dillydally", this is not as alluring as what was happening on the song before this , but it still works pretty well.

There is more shadow to the atmosphere of "Trad"  I think the melodies are allowed to float more so the vocals do not command the grooves as they do on the previous songs. Lyrically she ponders aging gracefully and what that means as a woman . The title track hints lives us to its name.  It is consistent with where she has gone on this album , as Shah continues to pull out every sound she can think of and slaps it into the song.  Thankfully The guitars do have more of a prescene on this one.  I think her voice works better with more of a rock instrumentation, and this is tested when she goes more minimal  on "Kite". This ends up feelin   like more of a sound than a song. There is more of a straight forward indie rock feel to "Ukranian Wine". It is closer to PJ Harvey's sonice zip code.

"Wasps Nest" has more a folk feel to the melody. The nusic is more electronic , and miminalist. He voice is uses more rythymically There is an odd sideways turn in her experimentation on "Walk" . Not a Pantera cover. He voice is used like an instrument. I can appreciate this. The beat to this song is like something from the mid 90s. After making it to the last two songs of this album you would think everything would make sense in the fact that nothing makes sense. I prefer what is going on with "Prayer Mat" that finds her ending the album strong. It is darker and the melody more hypnotic. She sings more rather than a sing song weaving around the beat. I will give this one a 9. The songs might not be a strong as her earlier work, but that is a pretty high bar. I applaud her for taking chances and doing something different , which over all works.