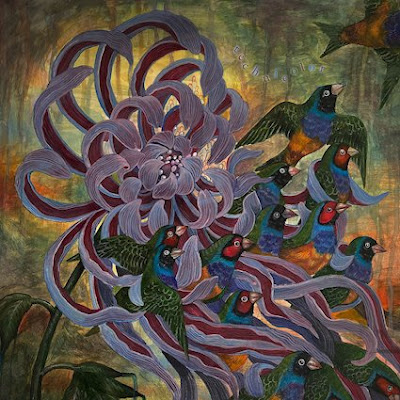 If you missed out on indie rock in the late 90s this is a refresher course as this trio from San Franciso blends many of the elements on their second album. This might seems like a weird and wonderful alien creation to those not versed in that era, but even bands who have done similar in the past decade like Minus the Bear have covered some of this ground with a more wistful take on math rock. There isa progressive jazz like element to the guitar phrashing and drumming. The bass player sit in the background. If he had more of a prescence it might give their over all sound more balls . They relax and coast on the groove of  "parachute". The first song to bring in the vocals of Yvette Young. She has a pretty decent voice and I feel this album would have benfitted from more of her vocals on it instread of just two songs.This is the first song that puts the rock in indie rock.

There is a more languid vibe to "predawn" that rolls along in an almost shoe glazed hypnosis. Not unlike the kind of narcotic images Mogwai once summoned. They do a good job of capturing a similar intensity of dynamics. This album is really well produced and the guitars sound great. My only problem with the presentation is more bass is needed. The ride more winding groove on the ponderous angular maze that is "Nero". For a largely instrumental album they are like June of 44 in the sense they still manage to retain my attention. They are great musicians and decent enough song writers to still engage you even if they are just jamming. This begin to cross over from math rock into prog. What is the difference you ask? Chops and ambition. Math rock was always the slacker younger cousin of prog rock. Coffee shop workers who would tell you Genesis and King Crimson were pretenous. I know King Crimson eventually became cool.

The drumming and guitar playing are both stunning when they do commit to the more complex life of prog on "Aries". That is not to say they have adbandoned all post rock leaning. They have not. I am glad to hear the bass player also decided to show up to the sesson on this one.  "Parrot" embraces more atmosphere but retains the prog jamming. The balance of the two work in the song's favor . I can imagine these guys are great live. There is a more dreamy post rock feel to "Odessa" . It carriesthe classic shimmering. The song's head doesn't stay in the clouds as it comes back down to rock out slightly on the build. There are less to the vocals of the last song than Young employed earlier in the album, but at least it is something and makes some of the instrumental dramatics serve more purpose. I will give this album a 9, these guys excel at what they are doing, but could be more focused on the songs if this was going to be an album I would listen to more, though I have enjoyed the time spent with it . Out on Triple Crown Records.