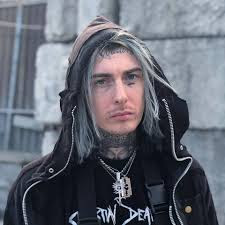 I am going to assume I do not need to introduce Ghostemane to you. The novelty of this as a side project is not lost with the flirtation of metal exhibited in past releases. Black metal is the genre being aimed for. While it is not a bullseye, there is a suitible expression of it. I often refer to how the egregore of where music is generated from influences it's resonance, this is why Scandinavian black metal tends to embody it best. This more urban history the act hails from adds it's color to the proceding but not in the way you might fear if you have come here with more of a curiosty from the metal side of the equation  It is of course released on Soundcloud as expected from where he comes from. .


The first song is pretty decent. The way the atmosphere is approached is the only really thing that brings his work to mind. The vocals are well screamed but behind a distorted filter so that gives them more of a n edge than the shredding of vocal cords. The first blast beats in the more traditional sense come on the second song where the vocals fall much further in the back ground and it is an attempt to pay more ofa homage to the old Burzum days of shitty black metal recording. Then things shift away from blast beats. There is more of a grunge feel to the guitar as it lacks the dissonance or tremlo picking that black metal normally has. There is some dynamic ebb and flow which I appreciate more than if this was just a nasty blasting of your ear drums out.


The riff going into the last song has more of a punk feel of Darkthrone's more black n roll era. For what it is this is ok. It wanders off into something more depressive  towards the end which I prefer over the more traight forward riffs some in. The strummed guitar is not unlike the kind of attempt he made at a Nirvana homage last year.  This album is less underwhelming than that oneIf you thought there would be more of a the suburban Soundcloud trap on this then , you are not in the ball park. For what is , this was nejoyable, an entire album might give me a better feel for who trve this is, but I will give it an 8 with plans to not give it any repeat listens as I have been here, done this and got the corpse paint. If you see this on anyone's best albums of the year list, disregard them as a humans with any worthwhile opinions on music.