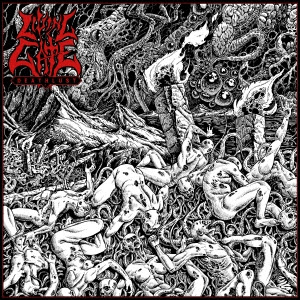 When I introduced Death is June I mentioned how I am going to try and feature bands that go beyond the status quo tried and true death metal formula, but I had already reviewed one album that fell into the more traditional confines of death metal. This is that album. With members from Amenra, Oathbreaker and Yob, I trusted these guys to at least not bore. Death metal can just color with blood red so how they use their sonic crayons is important here. They have the sound and know how to play it, so the most important thing I am now listening for it what is different about what they are bringing to the table? Without question great amost progressive guitar playing, that makes me ask but can you write a song. Yes . They answer with the second song, allowing the guitar to bring more melody. I would not call them technical death metal as they are not just about the math of their riffs. The are very precise in their playing.

The growls accent what should be the chorus on "Roped". While it is not shaking things up it does present you with something that sticks to your ears more than if they were just giving you a full speed ahead beating. They do administer such a beating in this very song, but there is enough fine tuning to make it work for now. I think if they did not deviate from this formula I would become bored. The title track is more straight forward. The roared vocal fall into the same old same old from what we have heard a hundred times before. Are they good at what they are doing ? Yes. The guitar solo shines and spotlights their skills as musicians , but the quagmire they are creating finds them stuck in tradition even if that is what they are paying homage to. They continue down this hyper aggressive show of excessive force on "Heaven Ablaze" and I begin to get bored.


I am not a fan of having eponymous songs, but that is what happens here. They are more angular and less full frontal assulat on this one. Not sure the results are much better as it comes across rather opaque. The riff kind of collide with out much form or function in terms of song writing. A little more straightforward than the kind of death metal I might expect from Relapse. I guess it doesn't hurt to come with references from your previous projects. Given their previous projects they got my hopes up for something different. I will round this down to a 7 as it is well played , but if your bar is higher in terms of what you want in regards to actual originality in originals you will under stand my complaints. If you just want death metal and have little discernment they hit all the right notes and will become your favorite band.