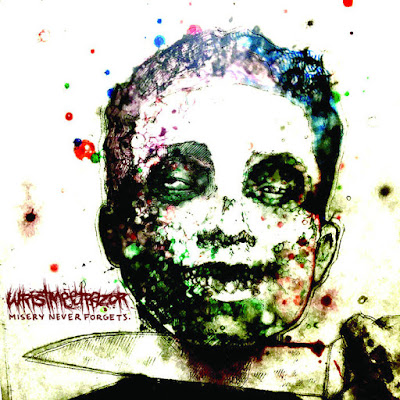 There is a mix of various styles on this album. All of them are dark and tormented, so it works for me.They throw the break downs of hard core in the right places and do not bring them in a tough guy manner. They can switch things up with more frenetic screamo type riffs that are given new life through not sticking to the conventions of the sub genre. The bulk of the vocals are screamed in a way that should get old with me fast, but they broken up with other vocal colors ranging from singing to lower growls.  They step way out of the box on " Come on In the Water's Pink" and bring in electronic elements with dead pan vocals that remind me of Wreck & Reference until the singing comes in. The most important piece of this puzzle is that it is dark.

There is a interesting interlude before "XOXO" which is a pretty straight forward hard core song . Not Bane style hardcore, more emotional.  "He Smiled From Ear to Ear" is not experimental for these guys as it follows more a screamo formula. There is similar but done more flawlessly with " Expiry Date".  The last song "No More Blue Tomorrows" works of the metallic side of screamo, with the chugs holding a great deal of weight. One thing going in this album's favor is for hardcore it is well produced.  Yes some of the chugged parts while heavy are not the most original thing on the planet but as a whole it still works really well.

I think there is more I like about this album than I don't like. If I was going to complain about anything it would be the screamed vocals get a little old, but as a whole that too if offset due to the other vocal approaches used. So I will round this one up to a 9. I am not big on screamo so they have to be doing something effective in order to win me over.