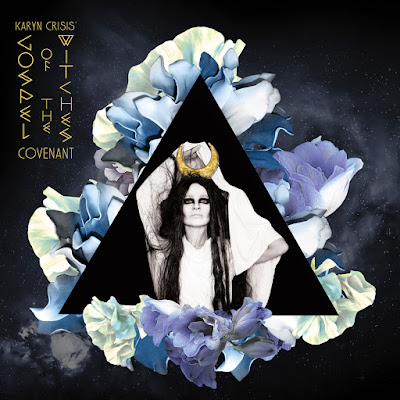 I sat on  this album for a while . I like it just busy with doom and now end of the year stuff.  If you are just tuning in and do not understand why I am fascinated with her well it is because she used to be in a band called Crisis that I used to love from the 90s . Marginally darker than the first album perhaps. I like how the vocals are balanced between her singing and the more growling voice she uses. The opener is pretty hypnotic. I am going to guess Charlie Schmid from Tombs is playing drums on this and the dude from Ephel Duath is playing every thing else. There is a little more of a rock feel to Drawing Down the Moon" that wanders off into it's own atmosphere. the guitars do not always adhere to what is expected from melodic creating and oddly melodic dissonance. How these sounds work is contingent on here vocals. sees her more aggressive grunt from her chest register on " Silver Valley" but at a minute and a half it is more of an interlude than a song.

"Great Mothers" gets heavier with sonic tension and Karyn growling more.  There is more of a lingering hesitation to "Benevento". Lyrically this album is more focused on witchcraft. "Dea iside" has a more slither tension to it's groove that got my attention. "Janara" starts off as one of the heavier moments and then wanders off into more atmospheric paths . The album begins to simmer in it's own pondering. It's pretty music , but much like the new Tool album the prog of it does not hold , your ear as it is so introspective it finds you look back into it wondering what is going on. Much like that last sentence. Unlike Tool this is not going on for over ten minutes so easier to take . In terms of prog this is more on the A Perfect Circle side of the equation .  "Diana Mellifca "  has guitars have more to grab onto and the song finds it's groove for her vocals to settle upon. It's actually one of the albums better songs. It is also clear by this point in the album she is not just throwing occult terms around but knows what she is talking about.

"the Circle Of White Light" ditty feels like it is more of an intro for "Blood of the Mother" that comes after it rather than a song with it's own two legs. Even this song builds the tension with out giving the kind of pay off you expect from metal. Even then I think what turns the tide and makes me round this up to a 9 is the fact I can leave this album on and let it play which goes a long way in my book.