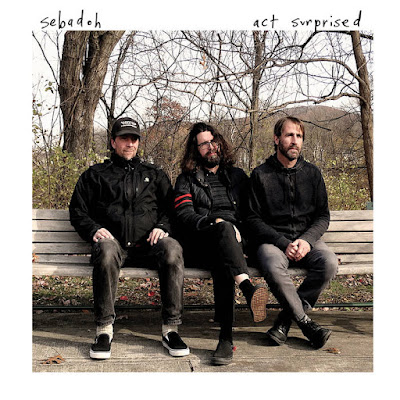 This 90's band is back with a sound that is true to who they are. Back when indie rock was the more jangling cousin to punk and grunge. They come on strong with the opener then back off a little for the second . It has a more down trodden slack sound. Melodies as disenfranchised as they might sound still show great song writing. By the third song I begin to remember some of the signature ways their guitars ring out. "Medicate" is pretty honest, but not as dialed in as the first three songs. The pace picks up for "See Saw" this is another one that finds their formula beginning to get a little stale as they are warming up old tricks . It's at this point in the album I begin reflecting the 90s and where I was at with this band. I worked in a record store the bulk of the 90s so I had access to a great deal of music not unlike the internet now. Thee guys were in moderate rotation. Songs like "Vacation" recall my fondness for them where other moments remind me more of parts of the 90s I was indifferent to.

"Stunned" has more shades of punk, where the slacker grunge melodies of "Fool" is almost more in the zip code of R.E.M. This side of the band is more memorable and appeals to me more. There is twang to "Raging River". At fifteen songs these guys were certainly pumping it out which leaves more of a margin for error. They do cover a wide range of sound while still keeping things within their DNA. "Sunshine" takes their quirk and pairs it well against the honest current of their plaintive melodies.  Vocally less was more with this style of singing. Their is a weird disjointed element to the title track. "Battery" is helped out by a more deliberate performance from the bass and drums. "Belief' is a politcal anthem of sorts that is about as in tune with the times as Bernie Sanders.

"Belief" sounds like if the Foo Fighters had stuck closer to the more odd ball side of Nirvana. There is a little more math rock in what they are doing here.The last song is really good so at least the album ends on a high note.   I will give this one an 8.5, if you are a long time fan then they are picking up pretty close to where they left off.