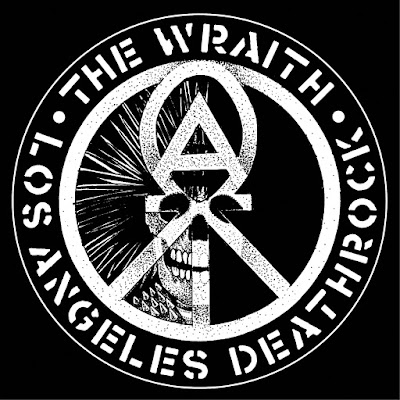 The first song made me think that this was the former singer of Bellicose Minds, it's actually the former singer of Lost Tribe, so post punk revival pedigree intact. more uptempo, though the do ride the line between post and punk and straight up punk. By punk I am still thinking of the cross roads where bands like TSOL dressed their sound up for Halloween. There a is a darker more Killing Joke like energy to the second song. All of the needed sounds are dialed in a pretty much where they need to be in the mix. The Bat Cave guitar tone is right there.  There are places where the bass could stand to come up in the mix , but production wise it's on even better footing the Lost Tribe albums.  a little more finesse on "Toil" as they back off on the punk vibes here.

If Idle Hands never heard the Cult then the results might be similar. "Of the Earth" doesn't do as much for me as the previous songs. "Pyro" is more aggressive , but also offers more dynamics than the previous song.  "Devils Serenade" is more along the lines of the Misfits ,but with a more rock n roll touch to it.  This is felt especially at the chorus, but it is a lot of fun. On "I Expire" the vocals are more sung than yelled . This helps add more dynamic texture to the overall sound. The guitars are also layered to there is more of a strum to them. They are back on the more punk track with "the Gift of Suffering". post-punk tension to it on the verse, before exploding out of the chorus.  The chords ring out in a more rock n roll fashion, with the palm muted tension returning again on "Barbed Wire" . It goes to the well with this formula too many times.

I am glad the vocals colors shifted a little on the last. The punk shouted vocal that sounded like Bellicose Minds was getting old, it is not the melodic shift of "I Expire" that I prefer, but I will take what I can get as by this point in the album I was in need of a dynamic shift, as it almost took on a one trick pony punk monochrome.  I will give this album an 8, if you like the more punk side of the Bellicose Minds you will dig this , and if you were a fan of Lost Tribe then this is a must.