Metal Church : "Damned If You Do" 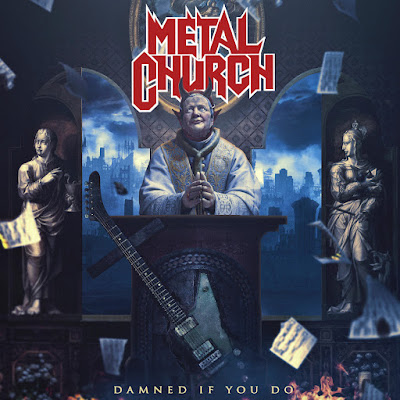 So Mike Howe and Kurdt Vanderhoof are the only members from the "Blessing In Disguise" era of the band, which is not the original line up, but a great incarnation of the band that I accept . Howe's voice sounds just as great as it did on "XI". There is a darker and more melodic tone to "the Black Things" which is more original than the more straight forward opener. "By the Numbers" lives up to it's name and is pretty much by the numbers what you expect from these guys, straight head proto thrash. It's the more somber and melodic moments like those on "Revolution Underway" that feels like the are in the right spot, despite the chorus perhaps not being their strongest. Production wise it lacks some of the heft "Blessing in Disguise" with the more organic sound from the late 80s.

"Guillotine" chugs along a middle ground with out the aggression that drives " Rot Away" , while it also adheres to the bounds of 80s thrash it feels more alive. They could stand a little denser and more biting guitar sound, as every thing is almost too clean here. They back up into the more melodic nuances with "Into the Fold" which still manages to thrash forward with a renewed energy. This is the album's strongest chorus so far, and perhaps the best song on the album, until proven otherwise, though they have raised the bar pretty high for themselves here. "Monkey Finger" opens with a very 80s metal riff, that could have almost come from a Ratt album.It also gives Howe a chance to really sing so I am not complaining. The chorus is more like a Judas Priest song.

"Out of Balance" is more up tempo, but doesn't seem to have the same bite as some of the other songs even at this speed , which is more of a production issue. The chorus is a little dialed in as well. "the War Electric" has the heft that the previous song lacked. This album is not their best, but it is better than expected and shows a sense of melody and songwriting younger bands with thrash aspirations could learn from and the only problems seem to be production points that could have made it kick harder so I'll round it up to a 9.