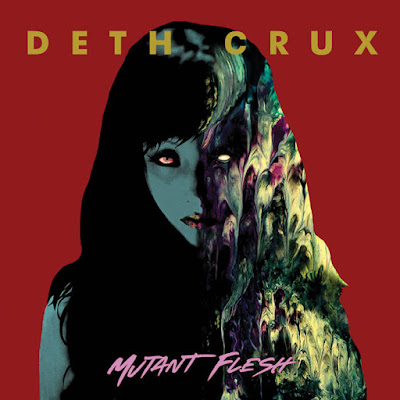 There is a darker more Bauhaus like feel to the opening track of  L.A. band's new album. I really dig the effects on the singers other wise dead pan baritone moan. There is a droning opaque murk to their sound. The second song "Spectral Other" has a similar atmosphere , but is more driving. There is a dynamic ebb and flow to it that the first song did not have. The vocals are a wandering narrative that never hook you in and leave that up to the bass and drums. I was not expecting the key boards to come in on "Black Abominable  Lust" . The vocals kinda cross over into death rock here as they are more expressive.  Even though the sax in "Chrome Lips" is a cool touch, there is more of a stiff post-punk tension that is a little dry to me.

There is a harder punk kick to the guitar propelling the title flesh. They keep kicking the punk in post-punk on the song that follow, which has less ambiance than the title track. It's more straight forward than what I typically want from these guys, but they succeed in what they are setting out to do."Lycanthropic Prostitution" is not only a great song title , but it's a shade darker. The thing about some of the imagery the song titles conjure is that the lyrics are not that easy to make out in the way he mumbles and moans. I can catch a few phrases here and there, like how he is not the man he used to be, and how he sold his body to the night" so it's not a conceptualized as the Misfits , but heading in that direction. In fact on this song I can hear where the Misfits might be an influence.

There is more sonic punch to "Persephone is Half Human". It ebbs down into a darker groove that is accented with interesting synths."Exploited Apparition" is more straight forward and works off a more punk tension. I prefer the creepy chaos that is "Yellow Sky" it almost has the sonic intensity of Atriarch. I'll round this one up to a, 8.5 , it's fun and they have taken a step in a more dynamic direction.