Bleach Birth : "Hatching Inside the Womb" 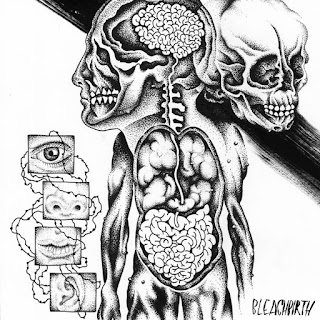 I've heard this band called death rock so it got my hopes up , but it's really raw snotty garage punk. They don't dip into something more post-punk until the third song. As far a punk goes "Chased By the Nazis" is the kind of 80s punk I grew up on. With "Glitter" they continue down this more classic punk sound.The album begins to fade into the background so I have to go back and give the tense "Honey" another listen. Its pretty close to what I want from punk, but with worse production. "Rot Remains" is marginally darker than what they have offered so far.

The songs are short so they tend to run into one another and punk can sound the same. There is not much to separate "Dreamlover" from everything else. "Rainbow" is the closest they have come to death rock so far. The bass tone could use more balls and come up further into the mix to really hit the mark. "Fantasy" loses me as it goes into more of the same kind of punk. "Savior" is a darker shift on this kind of aggressive hard core punk. The vocals have more of a rasp. Things get more death rock again on "Depths of Man". I like this song, I just wish it was recorded with a little more love and care. "Latex Clouds" finds them continuing to stay in the shadows , which I am of course fine with.

"Blind Eye" is back to the rougher edged punk. This is also the tone they close the album with on 46 seconds of "Snowflakes". I will give this album an 8, I think I already made it clear what I like and don't like about this album and obviously based on this score likes won out 80 percent of the time. So if you are into darker and dirtier punk this album is worth a listen.