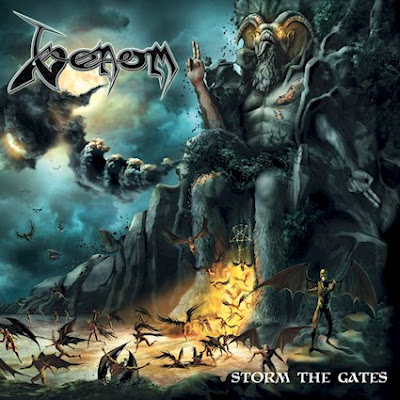 In my mind Venom is the band with Cronos in it and not a band with a Demolition Man or whoever is trying to pass off Venom Inc as the real thing. With that said there is more of a thrash sound to Cronos' voice on the new album, so it doesn't sound just like the classic Venom. But then neither does the other guys. The 2nd song "Notorious" has more of that classic Venom sound, though perhaps with a more deliberate thrash like chug to it, when "At War with Satan" era Venom had a more Motorhead punk like feel to. Cronos' voice sounds more in line with what I expect from him here and the touch of the 80s rocks it rock around the guitar riff at times. There is a darker touch to "I Dark Lord" which finds Cronos coming closer to actually singing .

"100 Miles to Hell" is more melodic and carries more hook to it than the more up tempo "Dark Night" which has a simpler thrashing pound. They slow down for the more deliberate "Beaten to a Pulp" which is only marginally more melodic and works off more of a throb before building up into something more thrashy. "Destroyer" breaks down on it's verses and sounds more like classic Venom , except for the fact the bass sits back in the mix rather than having the raw rumble of their earlier work. "The Mighty Have Fallen" is more of a blister thrash, that sounds like it could have been one of a 1000 bands from the late 80s. This is not to say I don't like their more thrashing side as they do it much better on "Over My Dead Body" which locks into a heavier groove for the verses. It's really hit or miss , as the riff to "Suffering Dictates" is more run of the mill however this is balanced out by Cronos' vocal pattern which he spits out in more of a classic manner.

"We the Loud" is another old school thrash song that attempts to work off their old formula , but is not that interesting until the final minute when it hits more of a groove. Their is more of an 80s metal feel to "Immortal". This is not a bad thing as the metal from the 80s was written with a great deal of hooks to it since the bands were more influenced by 70s rock. Then they pick up the pace for the title track that finds the guitars having more of a Judas Preist feel. Lyrically it is hard to take this album seriously as we know the Satanic references are only for fun and we have much more devout believers making music these days than we did when the only one used to be King Diamond. I'll give this album an 8, it's better than most of the younger thrash bands.