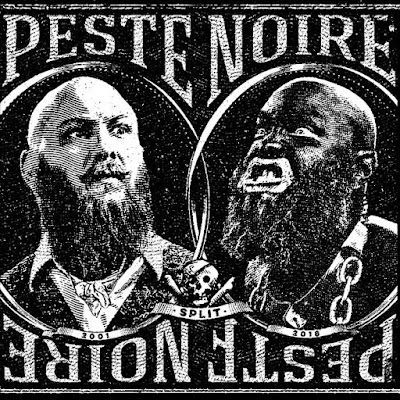 This is not an actual split so the jokes on you. This French project has been known for being wacky, but the album opens in a more straight forward fashion, pretty impressive double bass from the session drummer who played on this album.  On the second song sung vocals are more common place along with a wide range of other sounds that makes this sound like a black metal version of "Sargent Peppers Lonely Hearts Cub Band". "Raid Eclair" is marginally darker and more blasting, with the snarled vocals carrying a nastier rasp. The chords ring out with the kind of grim mood you expect from black metal. The guitars are very polished, there is a weird higher vocal that sounds like he is going coo-koo for cocoa pops. Double bass and blasting continue to dominate ad the next song finds them winding their way into more of a groove.

Midway into the album this is still a less avant garde effort with a more classic metal tone to "666 Millions" . The more deranged side of the band comes out on the song " Noire Peste". The songs after this finally touches upon the more perverse and experimental side of this band, that I feel sets them apart as a distinct identity of their own. Things that provide a coat of sleaze like the running tick of the 808 drum. Things well outside of the typical black metal box. They continue down the road with the almost rapped rock feel of  "Turbofascisme" . It's good to hear the finding their old depraved groove again. This is what I want from this band. On "Aristocrasse" they hit a weird place between kraut rock and apocalyptic trap metal. Needless to say when I band hits upon something that blends such things in this way I find it wonderful.

They close the album with "Domine" which is not as effective or grandiose in it's execution as the song before it so the results are more anti-climatic. It has all the elements that worked in the song before it I think this is just a case of them going to the well too many times with them. It doesn't suck it just doesn't hold the same impact. I'll give this album a 9 as it works more often than not and even their more meat and potatoes black metal moments are really well done.