The Bellicose Minds: The Spine 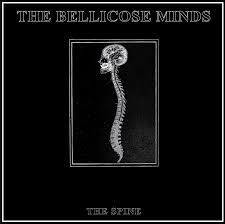 The Portland band is one of the front runner in the "death-rock" revival . Their full length the "The Spine" is an impressive slab of dark punk.It opens with "Lessons" that blends a punk aggressiveness with an early cure feel. The vocals are more punk in their intonation and delivery than Robert Smith, much closer to being horror punk than death rock but I think it gives the band a unique edge. The Bass does drive the songs leaving the guitar to cut creepy sonic swathes over the music.

The title track is a sardonic social commentary, the guitar off sets the pound of the bass. The album sounds pretty great for a genre that is typically under produced , my only complaint is the drums are low in the mix making wonder if its a drum machine, because the straightforward disco patterns add to my suspicions in this area. The guitar sound is dead on, and really up front and in your face, pushing its way to the forefront even over the vocals.

In most cases I advise against naming a song after your band name, but it seems to work here. This song also begins to show hints of metal in some of the punches. The lyrics are  despondent but not in the way  goth is often thought of. The song writing on the album is stronger than that of most of their peers.

"Call to Graves" is almost to close to more traditional pun than I prefer, I think playing into this tendency forces them to dummy it down and loses some of the melody that should be injected into the chorus. "The Observer" has a similar feel, where the vocals take on more of a shout, but the guitars swoop in and say the day in this one , a solo even fires out of the darkness.

They turn to more of a goth sound on "Engulfed" that has a wonderfully bleak guitar riff and slinking bass that weaves around it. This sort of post-punk flavor remains on "Visions of Pain" with a Cure vibe draped heavy over it, it is lifted from the more abrasive Kiss Me Kiss Me Kiss me and Pornography era Cure, so not the same delay drenched take on those influences. This might even be the albums strongest moment.

An almost more Joy Division element emerges on "Banished Alone" it takes a long winding road into the song, and the vocals are spat in short accented bursts closer to punk than the sort of poetry Ian Curtis once narrated.

I like the militantly anti-religious lyrics to "Bloody Hands" which lets the rallying cry simmer for a moment on the chorus as the death sentence is called out. On the majority of the album the bass tone really stands out and is given more of a spot light on "Destruct, the vocal line here is rather simple and this isn't the album best moment but even their filler is better than most. The Joy Division can be heard more in the bass playing than any where else. the album closes with " In Greed" that combines most of the effective formula, being powerful and confrontational without letting go to the chilling atmosphere, I'll go ahead on the faith that this album will continue to grow on me and give it a 9, a must if you are already a fan of the goth revival.