Up From the Underground : the Mona Lisa Twins 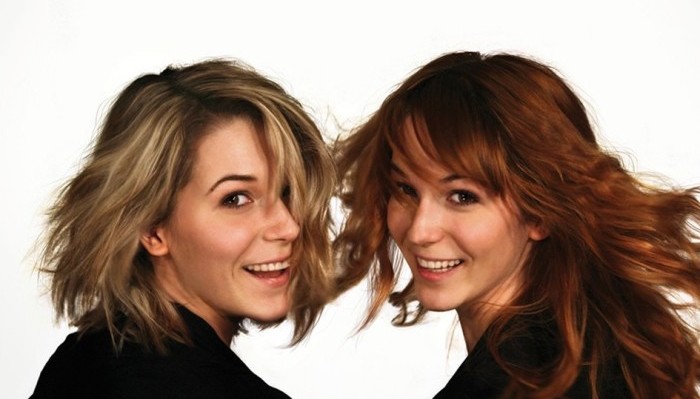 I was pretty shocked after hearing the guitar playing on their album "When We're Together" that these two cute Austrian girls are only 19.  Their album starts up with  the title track,  a straight forward  almost rockabilly number with unison harmonies. The guitar work is more intricate than the radio pop of the sixties that the girls wink towards.  The  crisp production  avoids being apologetic about the playing as garage rock.  The addition of  harmonica on "Won't You Listen Now"brings a more folk warmth.

Like Simon and Garfunkel , as their strength is their songwriting , which is nuanced by the great guitar playing on this album that captures the feel on the time period recreated . Early Beatles rides the boogie of "This Boy is Mine"  in the vein of  "Can't Buy Me Love" the guitar phrasing even pays homage to Harrison's playing in this era.  This is also the first song where they do not sing in unison through out and use their harmonies only as accents.

The strum of acoustic guitar has the feel more "Revolver" era Beatles, their voices never  over emote and stay honest in their inflections in a manner that would appeal to fans of indie rock. Even when things take a turn into balladry, their harmonies remind me of Rasptutina ever so slightly though it drifts on a much less quirky and much dreamier direction not unlike Joanna Newsome.

The backing band has ample chops to keep their bassist playing rolling melody patterns underneath sections simpler strum to them when their harmonies take the spotlight. Though the pre-psychedelic Beatles seems to be the rule of the day, yet the girls keep their sense of identity injected firmly into this formula. The swing of "June" helps keep them varied and continues to amaze with their smooth vocal blending.

The more Simon & Garfunkel feel returns on "The Wide, Wide Land". The guitar playing as a finer ear for detail than the folk music from this era and has a dynamic flow to it once the percussion kicks in. "All About Falling in Love" straddles the fence between folk and the 60's Beatles pop, with the harmonies leaning in the direction of the latter.  The songwriting never has a lull as their aren't anything songs I would think of as filler, staying pretty strong.

"I Wanna Kiss You" has the fun Beatles boogie to it though their harmonies are unique to them as they transition back into the verse. By the time the album closes with the closest wink to the psychedelic years it's clear these girls aren't just a sum of their influences with touches of 90's indie rock  like Liz Phair sprinkled about before the harmonica comes in.

These girls have some great things ahead of them if this is what they are capable of at 19. The guitar playing and harmonies really shine and keep the album a fun listen even more than the classic pop bounce that keeps things moving.
Posted by Wilcifer at 6:11 AM

Email ThisBlogThis!Share to TwitterShare to FacebookShare to Pinterest
Labels: pop/rock, the beatles, the Mona Lisa Twins, Up From the Underground