Up From the Underground: The Gabriel Construct :" Interior City " 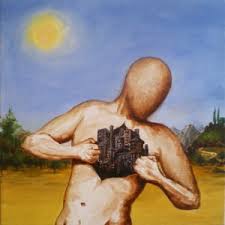 This is an ambitious "solo" project helmed by Gabriel Lucas Riccio.  An angular mix of progressive rock with the emphasis of its angular nature resting in the odd vocal melodies. It often results in something not unlike the post-Strapping Young Lad solo work of Devin Townsend, Where the vocals are purposefully clashing with the instrumentation, some times to the point of where they fight against staying in key.

The opener is mainly minimalist piano creating a web similar to that of a spider on acid. In his more subdued vocal range Gabriel brings to mind Ben Folds, but when he belts it out , things get more Devon Townsend. His voice sits pretty comfortably in the mix until he carries his chest register up. There are moments in "Ranting Prophet" that would appeal to fans of the late Sleepy Time Gorilla Museum that builds in turbulence up from a violin melody to a blast beat, though it comes across more palatable to non-metal ears as it's buried beneath layers of vocals.

His stuff would have fit very comfortably in the rock against rock movement that came out of the late nineties with bands like Estradasphere who took what Mr. Bungle once did and ran with it. Angular and dissonant ,  this never really reaches a place of darkness despite its sardonic nature. "Fear of Humanity" retains a touch of the Sleepy Time weirdness, beneath his layered croon as it is mixed into the spotlight. Sprinkles of harsh vocals growl from behind corners of this funhouse, but not in a primal enough manner to convince any metal heads, but fans of prog rock will find plenty to latch onto .

"My Alien Father" drifts into the song on a cloud of awkward harmonies tight enough to tell me these lapses the vocals take out of key are done for effect. The instrumentation on this will win over many who find the vocals difficult. My girl friend said his voice reminded her of David Cross from Arrested Development, and I can see where they similarities lie in timbre. Perhaps, if the show did a musical parody about aliens.

"Retreat Underground" keeps similar thematic elements in place, lyrically there is an abundance of science fiction imagery, it continues on "Subway Dwellers" which skims a darker tone than most of the album, the bass line pounds against the drums a little harder and might have more impact if the vocals set back against them more in the mix.  There are quite a few intervals that wink at Frank Zappa in the background. The guitar is buried in layers of this well woven labyrinth,  not typical of most prog these days that tends to have a fixation on shred, some listeners might welcome this. Oddly this album is mixed by bass player Thomas Murphy of Periphery. Not to fear as there are no traces of djent to be found.

"Defense Highway" is the first of three epics that round out the second act of this album and break the ten minute mark. The vocal bombast starts this one off. The crescendos blare out from racing grooves. Once into the meat of the song around the four minute mark, it begins to take on a dynamic structure not unlike "Lamb Lies Down..." era Genesis.

Darkest Hour Drummer Travis Orbin, is impressive on this album but despite his metal ties and playing, he doesn't make this a metal album.  The things this album wants to keep the spot light returning to the bright melodic vocals and the jazz inflected piano playing keep it from going down the Left-hand path sonically. This isn't a bad thing, I think it should be embraced for what it is, which often takes a few listens to put the finger on, like the jazz flow of "Inner Sanctum, which has layers upon layers of  swirling  notes that spin right past on the first listen. The nuance ghosts of King Crimson float the halls even though this might be the most straight forward song on the album.

The longest song "Languishing in the Lower Chakras" takes it time coming to a boil with the piano congealing out of sparse haunting abstraction and wanders off into a experimental noise drone, that at its peak reaches a wash of vocal harmonies before disappearing into ambience, more of an extended interlude than an actual song.

The Album ends on it's heaviest note with "Curing Somatization", the vocals are dipped in effects before dropping down into a clean minimal croon. The song kicks in not really straying far from what he has established as his own unconventional style though I think it is more fully realized here. The melodies stick closer together and the vocals while still jarring in there choices of intervals to travel are more melodious and their intention to jar is either now clearer or at this point you have gotten use to it. This song does come the closest to being metal, though only by the broadest definition and not by what we typically think of as metal here, or what today's metal head who is jaded by black metal thinks of as it either. However if you enjoy Ihsahn's solo work there's common ground to be found. I have to admire his creative spirit and while his voice isn't always my cup of tea, I'll round this one up to a 6 out 10 as I can see where the appeal lies and I can approve of progressive nature even if the execution doesn't always resonate with me.