Up From the Underground: Marla Mase -" Speak" 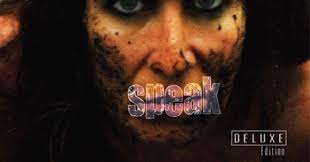 This New York based singer/ songwriter, is more than a siren or a diva, she tackles her songs with more vigor than most female solo artists who tend to forsake rock emotional introspection. It starts with ear catching intensity. It's easy to hear she is a writer as in the second song her need for prose weighs down the melody a little on " Piece of Peace."

There is something about "Open up My Heart"  that reminds me of "Riders on the Storm".  Like Morrison she wanders  from the melody into spoken word. Her voice is too good for her run from the songs in favor of lyrical indulgence.  The fact she also writes erotica plays to her advantage as the lyrics are accented in a very sensual manner to expose their exhibitionist tendencies.

"Lioness " rides the line between Chili Peppers funk and a children's song. I can see it playing as a narrative  to a puppet show. The woes and stories of cell-phones and the memories attached to them are debated on "New Cell Phone" this kind of tongue in cheek humor was often found in the golden decade of alternative music called the 90's , but how it will play to indie rock audiences  remains in question. The spoken word when it is a main stay of the song might remind younger kids of Cake, who they probably think are classic rock.

There's a very Diamond Dogs era Bowie swagger to opening riff of "Queen of Imperfection"  and stays in a e boogie aided by the bass player, though the melodies fall prey to lyrical over load. Mase redeems her self  quickly with " She Hooked Him Up" that has the Bowie funk of Fame. The unevenness of the song writing becomes more apparent in " Divine Restlessness"  where it seems like the producer would have stepped in and given her some guidance.

Who would have thought she could pull off a convincing dance hall song? She does just that on "Anna Rexia" which shows her lyrical brilliance put to its best use rather than being somewhat cumbersome as they feel on other songs. I begin to notice Debbie Harry inflections on "Kill Love" but her voice doesn't sound as sure of its self as it did on the previous song.

The vocal layers on the more melodic sections of "Blog" do her voice more justice than it gets in other songs. The band is always pretty dead on in their constant shifting of genres. There is an 80's pop feel to the chorus of  "Dance the Tango" and the whole song moves pretty smoothly, Marla stays in a casual sing-song  monotone.

Mase's voice is effective in the slower tempo of "Smithereens" allowing her to stay safely in her breathy register, where the lyrics have more room to flow freely. There's almost an Ani Difranco feel to "Scream" , though there isn't the quirky confidence to her voice that Ani has, her musicians keep the song moving past this fact. I don't think she is convinced of what ever character she is trying to play on "Squirm" and makes it sound like she was just improvising in the studio.  I think she could condense this into a more focused effort but overall, shows a depth of diverse creative juice that could be overflowing once she realizes the most suited glass to pour it into.