Up From the Under Ground: Aurganic "Deviations" 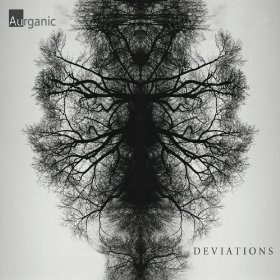 On September 24th , If any of the songs on this album sound familiar to you , you probably heard them on the soundtrack to the Mtv show "Made". The New York based band's new album is moody with the clouds blowing towards a light gray melancholy, there are a variety of elements the common ground on the first song is a similarity to the A Perfect Circle side project Ashes Divide when it comes to the underlying rock elements. The vocals of Joel Goguen from Innocent Bystander hold a much more mainstream rock sensibility serving as a counter balance against the more experimental post-rock guitar swells.

Scott Carruther's of Here Below finds his vice better suited for capturing the type of mood the music calls for on "Waking Trails" as rock is only the shadow element. His more relaxed soulful style is of a similar timbre to that of Josh Holmes from Queens of the Stone-age.  While there is no shortage of atmosphere or electronic elements this guys are hard wired to return to radio rock blue print when it comes to songwriting rather than leading you down the hypnotic rabbit hole.

They float into a more serene space on " Lucid" which falls somewhere between Smashing Pumpkins drum machine years and Savage Garden. The strum of  acoustic guitar , is an awkward contrast . It doesn't sit evenly in the mix and brings attention to the electronic elements, not by giving them a proper spotlight but implying the man behind the curtain studio trickery.

Vocalist Joel Goguen returns for "Paradigm" employing a more standard post -grunge rock baritone. The music is a flowing indie-rock in vein of Minus the Bear or Pin-back, so this creates another awkward juxtaposition. If this kinda of genre blending is what they are going for then, I suppose they succeed and need to re-examine their desire to ride the fence of commercial rock in this manner. Joel also sings on the song " Single Motion Sound", where the guitars continue to experiment with an unconventional style doing an angular dance around the beats, so his more straight forward approach to melodies works better in the power chord based choruses than it does the verses.

The other reoccuring singer on this album is Scott Carruther's gets another shot at it again with two more songs, the first being "The Lost  and Found". His more relaxed approach once again proves a better fit than the more forced arena rock style of vocals. He almost sounds like Rufus Wainwright if Rufus embraced his more Jeff Buckley tendencies rather than show tunes.

On "Swells' the guitar take on a tenser tone with their tight palm muting, Carruther's melodies are like water going down hill, there is no resistance and he should have been their main focal point when looking at singers to work with. He is not as rock n roll, but there is the moment of honesty a band has to have with themselves when they take stock and trade at what they are best at build from there. These guys are not rockers. This fact is further driven home on "Outcast" is has the lazy float of a Smashing Pumpkins ballad.

"In Deep Waters" is another ballad but with a darker more Pink Floydian tone, but structure around the piano line rather than the textural guitar. There's a weird 90's alternative soul feel to the Jessica Stuart "Easy"...no relation to the Commodores classic. I think over all less conventional vocal melodies would  benefit the band. Carruthers works best with what he is given, however I think a little more experimentation would take this album from being middle of the road with a slight lean towards alternative adult contemporary and give it more of a chance in the indie market. A little darker with a starker melody and they could compete with the XX.

The vocals on "Southbound" reach way beyond their means and could use some auto-tune, there is a cool guitar art that could be further up in the mix and these guys would be back in the Pinback ballpark. The title track that closes the album is an instrumental. Rather than seeing this as a freeing opportunity to cut loose and show off their chops or experiment with out having to be mindful of vocals, they merely write a song that is devoid of vocals but adheres to standard structure.

I think these guys have an ear for capturing good sounds and show promise  through out the album, but fall to neatly in the middle of the road for my taste. I think they are closer to finding their own identity than many bands that are the sum of their influences but they could stand to muster a little courage and not use experimental as a label but something they put to practice.