Up From the Underground: EdTang & The Chops "Goodbye, Zen5, Sushi Dinner" 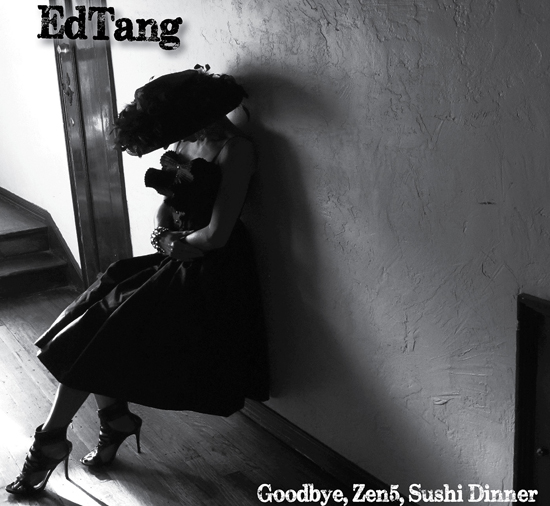 Folk Music will never die. It the sum of it's parts and much like the new album by EdTang, there's a family tree that combines Boozy Bluesy Appalachia infused country with an almost punk rock attitude giving it much more in common with Ryan Adams than mainstream college radio faves like Mumford and Sons.

The harmonica on "Crow til we Croak" drags up the ghosts of the god father of this sort of thing Bob Dylan. Tang is much more introspective and has non of the iconic social commentary of Dylan, but then again this are less iconic times as the  beat generation is paying for their sins in nursing homes. The clever yet subtle drummer behind the song keeps this train a rolling.

There is more of a boogie to "Lincoln" that is driven more by the walk of the bass line and the piano, than the strum of the acoustic guitar. Tang's voice stays within the warm confine fines of its beer and cigarette worn baritone. The harmonica rolls out the classic era of folk again on "Recharged", ironically this is also the closest he comes to crossing over into the newer brand of commercial alt folk.

There is something about the bittersweet "My Whole Life" that reminds me of " the Drugs don't Work" by the Verve. Though when he reaches for notes there is much more of a rasp, though in the build his old high school punk rock tape collection comes out from under his bed, where he tried to hide it from his Americana buddies. This punk rock momentum carries over into "Beware of a Dog". Is he a relic of the myspace age who's manager told him to hobo his sound out and hang out in coffee shops?  There is an odd marriage here, but it's much more easy on my ears than Mumford and Sons , that is what every one I hated in High School is probably listening to now.

Things drop back down for the female sung "Pualel" that wouldn't be out of place on a Decemberists album. "Just Two Old Friends" starts with more Dylan worship and hovers around a country camp fire song, with slide guitar breezing around the chorus.  The album closes with the lamentations of " Bill, I believe this is Killing Me", leaving every one to weep in their whiskey , but I don't think this songs is as emotionally effective as "My Whole Life".

I think this will appeal to fans of alt Americana who have more rock leanings like Ryan Adams or even Hot Water Music. Folk punkers though will have to have a tolerance for country and Bob Dylan as this has nothing in common with Death in June.