Great Falls : "A Sense of Rest" 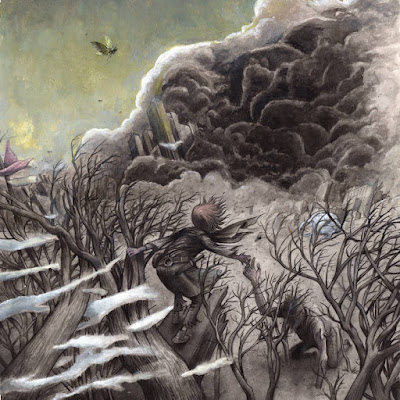 Here is the  last album of 2018 I am reviewing. These guys are former members of Kiss it Goodbye and Jesu, so despite their past work things are not as experimental as you might think. Sometimes the simplest description is the best. While p/r companies and record labels might like to dress things up with whatever adjectives fit the current bang wagons this band out of Seattle is a dark hard core band. They do have metallic Converge like leanings if we are thinking about "Jane Doe " era. Angular jerking of riffs that are filled with resent. "Not For Sale Bodies" has a more oppressive pound to it's deliberate lumber. It also begins to introduce more atmosphere. "

Kettle Logic" blows by in an angry blur and it's not until "We Speak in Lower Case" that things begin to get interesting as there is a cleaner guitar tone and the vocals are not as screamed. Not sung, but heading in that direction. This song proves to be the most dynamic so far . Not many hard core bands have almost 15 minute songs , but they make the most of it."Thousands Every Hour" does have the driving bass and the noise around it's rough edges that brings to mind the Amp Rep bands, but they are still more hard core than not. They continue down a smoother shadowy brand of hard core balancing out the blitz of bombast with atmosphere. It is when they are in this zone that they are most effective and find a sound they can call their own. "I Go to Glory" pretty much just works off all the elements that have been in place while adding a little more of a hard core punch here and there.

"Scratched Off the Canvas" has a heavier almost sludge like feel to it. It might be the most metallic song on the album. The vocals are more on the side of a punk shout than scream. There is still an angular cadence to what they do and squealing feedback which has become their trademark. This is kinda anti climatic as there is a great deal of build and not much in the way of pay off. Overall this album is pretty good, I like the bleak mood it creates. I'll give this an 8.5 , Corpseflower Records is releasing this in the US.