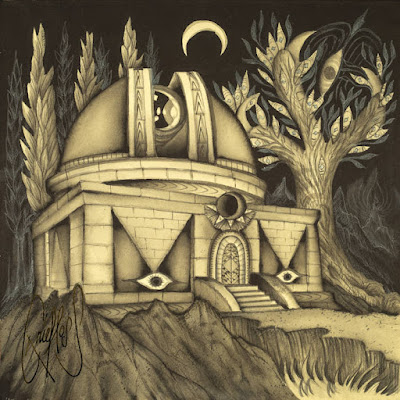 I'll have to go back an listen to "Ruiner" again as the first song of their new album sounds more like alternative rock than I remembered. Not that I have a problem with it as I like the melodic touch. It is not until the second song "Blood Flashing" that the blackness begins to seep into their sound again. The vocals sound more anguished. I commend them for not being dependent on blast beats as they are only tossed in upon occasion. There is more chaos touching this song that what I remember previously hearing from these guys as well. "God Is Hell" works off of a similar brand of savagery as the previous song. The differences being the guitars are more textured which finds them dipping back into what often was called "black gaze" once upon a time when bands like Deafheaven and Alcest first began taking shoe gaze atmosphere and marrying it to black metal. The double bass on this song is very aggressive without being used in the steam roller method most death metal bands employ. Rare for black metal is the fact you can actually make out the bass line and it is really driving the music forward.

"Life is Too Long" is more along the lines of traditional black metal or at least their take on it as the guitar is till layered to create a sonic pulse. When they do go into a blast beat on this the vocals shift to a meaner sneer. They get some interesting sounds going into "Total Hate" that reminds me of something Liturgy might do. While I appreciate the art of experimentation, I don't think it stands along side the other songs as well and feels more like an interlude.The almost 8 minute "For Decades" closes the album. This is a return to the more alt rock / post- hard core sound they opened up with so it is interesting how this album is bookended with a sound so dynamically bi-polar against the meat of the music they pump out here.The sung vocals remind me of a little less frenetic version of At the Drive In. The harsher vocals does a call and response against the singing. It ebbs down to  sung section before they build back up into something not black metal , but at least heading in that direction.

Thing album is a mature shift for the band  on both of the polarities they engage in on this album. I think the drummer has stepped up his game for sure. I will round this up to a 9, the songs are strong even amid the more tortured  moments of chaos. They just released this album online on the 4th. I think they can't bee easily lumped in with any genre. Black metal might be at the heart of what keeps this album moving, but it is not just that. I think fans of hardcore will appreciate this more than your average black metal fan, though someone who is a more open minded fan of the genre will delight in the more agonizing moments here.