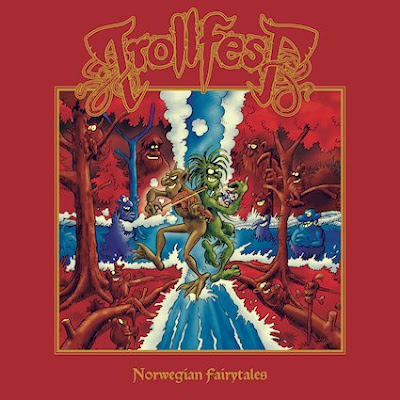 The band from Oslo's 8th album. They play an almost polka infused blend of folk metal that is very up tempo. The first vocals is a more squawked harsher shriek.  The second song is a more frolicking variation of the first song. With more of a gang vocal chiming in like a rowdy viking drinking song. There is a little more of a melodic touch to "Espen Bin Askeladden" , though it ends up in a similar place as the first two.  The "Fuck Flys" or what it roughly translates to is a shift into a more dynamic direction thanks to the female vocals . There are a few pieces that are so quick they are more like interludes than songs. One exception to this which is only a minute  and a half , is more like a punk rock song. Its not their best moment , but they do make the most of the time they invest into this ditty.

"The great achievements of the small people " is a heavier and marginally darker song with a sung baritone bellowing vocal refrain. The put a little more into the song writing of "Draugen", the  guitars have most of the melody though a sung vocal does show up in time. They blast into another short song with "Deildegasten" which makes them like the grind core of folk metal. "Barter Swaps" has a more playfully chaotic mood to it, though it keeps a skip in its step. The last song is more of the same if not a variation of it. At over  eight minutes its the longest song and more dynamic elements like female vocals help to add color and set it apart from the other songs.

I'll round this down to an 8. They are good at what they do . The only problem I really have is what they do is often a shade or two happier than I wish it would be . By the 8th album it's obvious they should have their sound pretty much dialed in. So like the Ossuarium album I just reviewed and said unless it's both different and better than this album there is no reason for me to review any more death doom, they same thing could be said for this album, if you changed the genre to folk metal. This is being released January 18th on Noiseart /Napalm Records