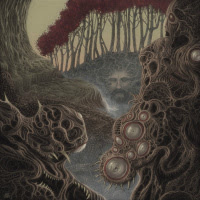 If you want to hear death doom done really fucking right so that it's more doom and not just slow death metal, then check out this mean mother fucker. From Australia , their previous album "Innsmouth" had some gnarly spewed vocals this one has out done that performance in the first two songs alone. Some of this might be thanks to the attention to detail in the production this time around. The guitars have a more angular dissonance to them which also helps paint this unnerving picture. There are some interludes that I am just deleting as I go so for the sake of this review we are only counting the songs. The first two songs do have a similar sound. Like many extreme metal bands , after the first stunning blow they hit you with wears off then it boils down to song writing. "Necornomicon" ...which if you had not caught on this is a Lovecraft themed band, give you more breathing room and a melody of sorts begins to drip from the shadows.

Things stay just as dark and get more melodic as the chords are allowed to ring out more on "Wreathed in Ivy"as the song builds momentum some guitar melodies do float out to give it more substance. "Matricidal Lineage" is dense and throbs with a heavy pulse but doesn't do a hell of a lot to set it self aside as a song. Their sound is good. If might even feel evil it gets so dark. They need to do a lot more in order to keep my interest for the almost 13 minute closing song " the Dunwich Horror" . It takes three and a half minutes to really get this one started. As the album progress I notice the vocals take on more of a snarl and less of an anguished growl to allow the lyrics to become more discernible. It does find them locking into a similar feel.

I would say the songs on "Innsmouth" might have been written a little better, but this album sounds better and finds them adding more atmospheric layers, though the songs do being to develop a more uniform sound by the end. I'll give this an 8.5 and see how it sits with me.
Posted by Wilcifer at 9:28 AM