Looking Back in Anger at David Bowie's "Lodger" 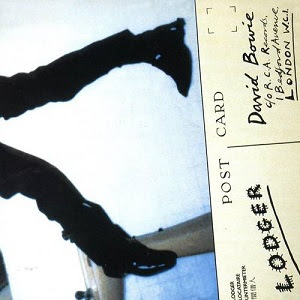 Considering that Bowie is the single most important artist that ever touched my life, how can I not review one of his albums. Its obvious why I had to review this one for this series. This is the last of the Berlin trilogy and I am not going to get into Brian Eno's weird Oblique Strategies card game that they use to break creative blocks while making this album.While all the hipsters at the coffee shop only listen to the avant garde trilogy created during Bowie's coke binge, truth be told him and Brian Eno are the original hipsters. Of the albums from this era this is the one I have spent the least time with. So it's like rediscovering it.

He croons that he doesn't want to live with somebody else's depression. He hits a really beautiful note a minute and a half into this one. It has a smooth sway and swagger to create a stranger dynamic considering the weirdness to come. It's his classic post Ziggy band with Carlos Alomar on guitar, Dennis Davis on drums and Dennis Davis on bass. They were supplemented by Brian Eno and Adrian Belew. "African Nght Flight " is well done for the kind of experimentation they were going for here, as he beat Peter Gabriel to the punch when it came to dabbling in world music. I think  "Move On" is a better song, and truth be told Bowie is my favorite singer so I want to hear songs that are going to make the most off his voice. He has the lower more distinct baritone croon on this one.

"Yassassin" is one of Bowie's best and most unique songs with its Middle Eastern feel. It show Bowie can be as weird and wacky as he wants and still make a great song. "Red Sails" is upbeat art rock with a groove. It's an interesting song though not as good as "Yassassin" , but probably better than anything your favorite band has ever done. "DJ" has more funk and Bowie is singing his ass off on so what else do we need? A the song progresses you can hear the weirdness dripping off the edges. Another clss and the song I named this column after "Look Back In Anger". This song has a great deal of drive and is one of drummer Dennis Davis' most impressive performances.  "Boys Keep Swinging" always seems like a gay anthem to me, its a great song. "Repetition" is not Bowie's most inspired moment but you can hear where the seed for Tin Machine were planted here. It ends with "Red Money" which sounds like it could almost be left over from "Scary Monsters".  So marginally darker in it's tension. So even if it's not my absolute favorite Bowie album it's still a good one which makes it better than what mere mortals can do and is a 10.