A Pale Horse Named Death : " When the World Becomes Undone" 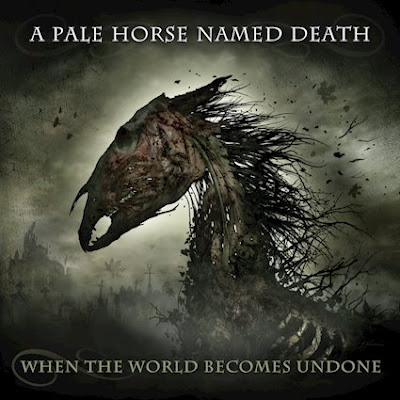 I guess this is as close to Type O Negative as we are going to get . This does seem to be a more intentional stab in that direction. The opening song has more atmospheric layers in it. "Love The Ones You Hate" has a more new wave vocal melody to recapture a darker sound. Production wise the kind of feed back into a jagged rumble of bass meets guitar also plays into recapturing that sound, though the vocal to "Fell In My Hole" goes in it's own direction. The song is not as thick with atmosphere and feels more straight up rock . I don't think this album is as heavy as what I have heard from these guys before, when when they step on the crunch with a song like "Vultures" its more of a grunge sound.

Despite this not being as heavy I would say even a quarter into the albums it's more well written that what I have heard from these guys before. This almost Alice In Chains kind of sound continues on with the deliberate pound of " End of Days" . One of the most metal things about the album is how the guitar solos blaze out of the northern sky. "We All Break Down" carries the grunge torch further into the 90s when metal tried to figure out how to merge with it. I liked that time period 95 to 96. The guitar progression and vocal layering on "Lay With the Wicked " reaches back into more of a "World Coming Down" era Type O, which is more than can be said for the middle of the road radio rock that is "Splinters" It doesn't suck it just is not as interesting of a listen.

"Dreams of the End" is dressed up with a little more atmosphere and the lead in with a heavier ominous vibe. It gets this weird post- Use Your Illusion era Guns N Roses feel to it , which is not a deal breaker. It is however not the album's strongest song. I'll give this one a 9, as it not only reminds me of Type O but gives me some nostalgic feels for that mid 90s metal.