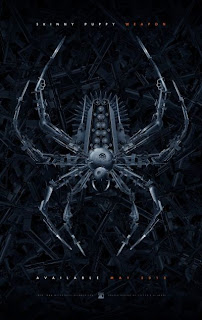 Once I discovered Skiiny Puppy senior year of highschool they became not only my favorite industrial band but one of my favorite bands, if the term bands applies to what they do though this album does find them as a three piece. The bar is going to be raised pretty high as it nomrally is with my favorite who you know I cut no slack and hold to a higher standard, so I wasn't blown away with the album's opener "wornin" which sounds like an outtake from the Tron soundtrack. Its not dark enough and lack the grit and grime of a heroin din. It's not bad , for what it is the song succeds it's just I have a different idea of what I want from these guys, as the lyrics are really the only thing that makes this Skinny Puppy.

This problem is solved on the second song "illsiT , which I think is a much more fitting opener. The synths are dirtied and have some metallic dissonance to them. Skinny Puppy has teeth, that is what makes the industrial, I don't want to dance to them I smear the walls with the blood of an overdosed hooker to them. The robot ghould chant of " this is a criminal age" captures the Blade Runner meets Requiem for a Dream feel I need and uphold their legacy. Now can the rest of the album do that ?

Well "saLvo" heads back to a dancier direction but the synth patterns are darker to give it a more "Too Dark Park" feel. Orge screaming screw it in the refrain gives it more attitude as well, I can take some Dancey Puppy as long as they aren't being pussies about it. The prodcution is pretty stripped down almost like old Depeche Mode, no swathes of distorted sampled ugliness in background like "Last Rights"

"gLowbel" sounds like it could have been on "the Process" though like most of the sparsely orchestrated arrangements on this album it's lacking guitar. The vocal melody on the verses has an angular quirkiness to it that works in the same fashion many of the melodies on their 96 album did. Things get real EDM on "solvent" whose simplistic beats gets surrounded by the Daft Punk synths, that Orger sneers around. Though this song does feature guitar thats really low in mix, and the mix through out the album keepsa sheen of android plastic on everything.

The shifts into more familar landscapes on "paragUn" that while robotic has more of a cyborg soul and some of the best produced vocals on the album and the synths get meaner on the chorus to help win me over. Their are some creepy moments of ambiance on this one that remind me of "Last Rights", the lyrics seem to take on more of social commentary than past albums are perhaps the clairty with which the vocals come across force me to pay more attention.

The vocals on "survivalisto" off set the bouncy nature to the synths and keep the beats from getting too happy though there seems to be more of a tug of war on this song and the synth sound might not have been my first choice as it could use some drugged out grime to it. On the other hand to balance out these moments there are songs like "tsudanama" whose beat is covered in a thick layer of overdrive and take the place of where the standard industrial metal guitar riff would normally go, the song stays very dense and almost buries the vocals. Though wehn they come back in higher in the mix with gnarly effects on them its pretty fucking effective.

"PlasiCage" isn't really industial and is still on the dancier bent they are on here but the movement of the song is very aggressive, it feels more like something from the "Greater Wrong of the Right" period. The "Last Rights" feel returns with "terminal" more in the fact it's ominous with alot flaoting inthe back ground to create a heavy ambiance rather than smack you in the face with it.

Does this hold up as a classic against "Last Rights" or "Too Dark Park" . well time will tell even after a few listens its really going to depend on how some of this grows on me, the clean un-glitched production really makes this more edm than indutrial though there are some strong moments, if they were heeding my wish list I would ask for more of Orge's "singing" voice think "Candle" and more guitar but for what it is there are enough dark edges on most of the songs to keep me distracted, so I will round this up to a 9.5 as its not perfect but pretty damn good after a few listens.