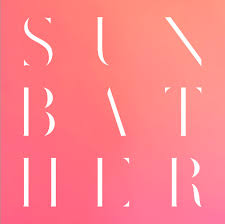 The opening track and first single "Dream House" is a fitting name  if the house is on fire, in it's ascent to the cosmos. The blasty mc nasty has a more jazz like sheen to it rather than feeling like you are being hammered by it, in some ways this dulls the numbing drone which most black metal creates. The first four minutes blast along like fast Mogwai, then the tempo shifts like a meaner Explosions in the Sky. Yes, I am not referencing black metal bands here because this is by and large not a black metal album, though we can now think of it as they were influenced at one time by black metal and the shadows of those influences lay beneath what is largely a very radiant sound. Though if I was going to draw comparisons to any black metal band it would be one who has undergone a similar transition An Autumn For Crippled Children, it is very similar in feel to their last album if you need a point of reference.

"Irresistible"  is more like a piano outro for "Dream House" than a song unto it'self.  The title track that follows begins in a sonic drone that flows into a post-rock cascade that crashes into the punch of the drums. The screamed vocals are a static layer against the sheen of the guitars. The songs have a more dramatic ebb and flow than on "Roads to Judah" . Midway into "Sunbather" the blasties come in but only with the aggressive approach for a minute before the melody of the guitars offsets it and catches it up into the dreamy tempest.The blasts sneer back to life with more teeth to it and the drumming gets pretty impressive when it builds out of this to drop it back down and build it back up again. I'm not sure if its the production which is so clean of this or not but it doesn't come across as heavy as their previous album. The shoegazing comes in at the last two minutes, coupled withe jangle of the clean guitar which has a more Smiths like purity to its tone.

"Please Remember" feels like a  part from a Swans album but when the clean guitar strums its way in where Micheal Gira would normally sing to make it an actual song it instead like the other song I think of as an outro is more of an intro to " Vertigo". This song starts of with ghostly guitar and a darker tone. Sure its very Mogwai but the first three minutes of this album is some of favorite guitar work on the album . Even as it builds into a more intense My Bloody Valentine like drone, it stays dark and dissonant until the very metal solo comes in over it. The blast at the five minute mark here is more convincingly black metal in feel. At fourteen and a half minutes this songs ebbs and flows like the others so it does build up substantial momentum leading  into the final four minutes and is the most metal song of album and I get what I wanted earlier in the album which was to hear the harsh vocal provide a counter balance to the clean dreamy guitar. In doing so this makes the vocals sound more tormented and creates a feel similar to what the depressive suicidal wave of black metal bands did.

"The Pecan Tree"  blasts from the beginning, then a minute goes into a weird trippy My Bloody Valentine syncopated part where the drums hold it together, before it attacks again. It steadies fora few seconds into a gallop and takes off again. It keeps at this pace for the first four minutes and then floats off with the drums doing some rather interesting things underneath this. Another Explosions in the Sky comparison could be drawn here as the guitar twinkles like a star. The drummer also shines up in the sky, it's really highlighted on this song where some of his most innovative playing takes place. A sample fades in underneath the floating drone before they kick into a powerful build that focuses more on melody and is an exercise in restraint for these guys. Is this overall a more mature record, yes... and I feel it will continue to grow on me.

The only problem I have is for songs which are so precise in the details of their construction, it seems a shame the vocals are pretty much an after thought. Some of this is performance for his scream is pretty one dimensional, sometimes it's more drawn out and accented differently but tonally it stays the same in a higher mid range. I think effects on them might have given them more depth because god knows all the other instruments have them on them.

So for this reason I give the album a 9 rather than a 10, because I think this keeps it from being perfect. This might take some getting use to for some listeners but then there were plenty of narrow minded metal head crying they had sold out when "Roads to Judah" because they production made it more hipster metal than their demo. I think if you are a fan of post-rock or black metal but open to what boundaries can be crossed in those genres then this is worth a listen without a doubt and will be getting many more from me.