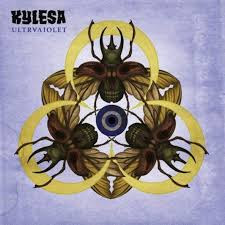 Kylesa's adventurous spirit of the past few years earned them them the most likely to become the next Mastodon award. This album is no exception even with the opener " Exhale" There is more stomp to this song than found on their past couple album sand the rapid vocal trade off reminds me of their " To Walk a Middle Course" album.

"Grounded" – has more of the Mastodon rocknroll feel to it, though Laura’s vocals float in a more ghostly manner of it. They are also aided by the production in heavy layers. This doesn't really hit me as the most inspired song on the album and seems like it's new rock n roll tricks atop some of the more lumbering riffage we have heard from them.

Not that I mind Them revisiting similar territory as it works really well when the sludge guitar sound returns on "We’re taking this" , Laura’s vocals get so gruff it can be hard to decipher them from the roars of her band mates, not sure if the more ambient transition works as well as they have pulled these sort of dynamics off in the past, though it has grown on me and the " what goes around come back around" while not lyrical genius is pretty mean.

"Long Gone" goes into a more hypnotic attack and is a good balance of the two modes of dynamics they now employ. I am not sure how I missed this drum break on the first listen. I take it this is the work of the dual drummer thing they have had going for a minute now, though listening to the album I tend to forget that its an element.

The abbreviated attack of "What Does it Take" is pretty straightforward and these songs could be more satisfying for those who have too short of an attention span for some of Mastodon’s prog epics. It's on the more punk side of what they use to do but sounds weird when applied with the range of sounds they now employ.

Their new found maturation of melody really spreads its wings on "Steady Breakdown", the most evolved singer of the band. The melody has an serpentine sensuality, and the almost shoe gaze glaze of the guitar winds around the songs dark corners. It becomes clear how this is a much darker album as Low tide opens like a Cure song mixed with a little Mogwai in the way the effected guitar floats. I can even hear a little deathrock in Laura‘s voice on "Vulture’s Landing", though the song it's self has way more drive than Siouxsie. There is also a lot more soul poured into the few guitar lead which spill out of songs .

The very radio rock intro to "Quicksand" weaves into a riff that reminds me of the Catherine Wheel, though with the movement of one of the Deftones more modern grooves."Drifting" does exactly that with layers of Cocteau Twins like guitar that shimmers around the dreamy vocals until things build in the last minute. I like the fact this album is darker and the use of vocal melodies is a focus rather than an after thought on a much more consistent basis, the fact this might not be as in your face as their other albums is going to take a few listens to get use to but they are pulling from places I like so I'm already more than half way on board. The production is excellent and I like they make a different feeling album every time they go into the studio which show their continued growth as song writers, I'll go ahead and give this album a 9, but include the disclaimer that this isn't a metal album buta step forward for the band none the less.