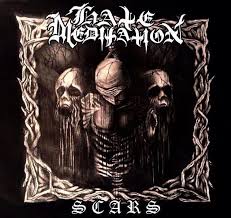 Not to be confused with the band from Finland this is Blake Judd's newest effort during his current  break from Nachtmystium. Fans of Nachtmystium's early work will be particularly pleased with this release as it is a return to raw more cvltish black metal, this is not to say all elements of experimentation are up in smoke with the rest of the burning church or that is color by numbers black metal.  The band on this album is Wrest on Bass , Job Bos of Dark Fortress on synth and Sam Shroyer of Vitandus drumming. Familiar faces though not a super group the likes of Twilight.

"The Deceiver and the Believer" starts things off in cascadian flourish of fury, yet their is a constant current  of ambient drone, for me this plays as one of the albums big strengths as I think its as important to be as heavy sonically as you are heavy as in metal, because with out the sonic factor it leaves the door open for the seas of cheese to flow in.

"Impure Rage" has the feel of old Immortal, Judd uses one of the more evil croaks I have heard in some time and that is saying something considering the amount of black metal I listen to. The  lyrics are more decipherable here and sound like a cheering section for a suicide. Their as some subtle melodies layered in the fray which take a few listens to pick up making this one grow on me, as on first listen I thought this song to be a one trick pony.

"End Times" stays the chorus with the blasty mcnasty, but the drums are buried in the mix. The croak is just as depraved, I like the line in " chemical decay I wither away" its a very stark narrative through the entire album and moments like the chords which ring out in what I suppose is the chorus has an almost depressive suicidal feel. In interviews I have read with Judd he has said he felt burnt out with metal and recently became a fan again so this album displays that and from other things I have read points to depressive suicidal black metal  getting him back into metal, which makes sense due to it's morose melodic layers.

"The Genocide March"  goes into a nice swaying verse riff  before resorting to a much more straight forward attack which reminds me a little of Nachtmystium. What becomes the chorus carry more punch in dropping back into a half time waltz and carries a creepy melody. The lyrics fuel the fires of Nachtmystium's Nazi allegations, but are no more incendiary than what Slayer has been writing for years, though they could be directed at Christians or the general populous of sheeple.

"Wrath and Revenge" is a very straight forward wave of blasts in your face, but the fact it is so straight forward causes the scathing elements to lose some of their bite after it drags on relying on the only dynamic until the last minute when it slows into a groove. The title track is more than likely my favorite as it borders on being shoe gaze it's so hypnotic but it doesn't force some fairy balladry on you like Alcest in the process. It revels in it's sluggish darkness and wanders off into some interesting places, i think all the transitions work pretty perfect and this is the most flawless moment on the album.

I under stand the reason the production value on this is muddy and comes nowhere close to sounding as good as any of the last three Nachtmystium albums but some times it plays to the albums favor sometimes not so much I think this is more of a passion project so budget restriction might have played in to this or they could have made a more conscious choice to want to get the old Burzum sound. I'll give this album an 8.5 though by the time the year ends it might have grown on me, if you are a fan of raw black metal go ahead and round this up  to a 9 as chances are rough recordings and straight forward song song structures are you thing.