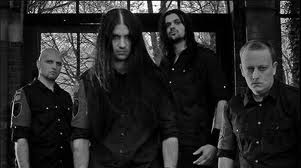 Windir was one of the first wave of Norwegian Black Metal bands whose members have gone on to form Vreid, with still black in their intent the band has a broader scope of sounds they pull from as evident in their 6th album "Welcome Farwell" so it was good to catch up with Bassist Hvall

Wil-The New album "Welcome Farewell" almost reaches back to the Windir days, How did that come about in the songwriting process?

Hvall-I didn't reflect much on the direction I just focused in my studio. Listening back afterwards then I can see where the listener might be hearing the first album and the Windir days.

Wil-I noticed a more thrash like vibe through out the album and on the way the guitars attack, whats this attributed to?

Hvall- Well the guitar sound is pretty much the same I think its more how the bass and drums are recorded and how they sit around the guitars in the mix.From the start the focus was on the main riff of the song, if a new idea exists I try to give it more focus and clarity. We rented a cabin before we went into the studio and I think that helped capture more of a live feel.

Wil-Windir formed back in 94 making you guys a part of the first wave of Norwegian Black Metal, in forming Vreid how important was it for you to break away from the limitations of that legacy?

Hvall- We didn't want to continue doing the same thing, though a lot of the elements are there. With the old stuff there were so many multi-layers with the drums so to sit down and focus on stripping it down was refreshing. There have never been limits not limits of our own as we like what difficult and our main focus is to just create the most authentic music to us, even though we draw from listening to may types of music.

Wil- What music do you see as being an influence on you this time when you headed into the studio.

Hvall- My record collection has pretty much stayed the same its all the old stuff. Stuck in the seventies, stuff like Alice Cooper and Black Sabbath.

Hvall- There are single songs here and there but overall there is a band from Norway that's more of a rocknroll punk sort of thing called Kvelertak.

Wil- You mentioned Alice Cooper , I think with him he gets overlooked by stuff like "I'm Eighteen" when on albums like "Killer" there was more of a progressive rock feel, are you into more of the progressive rock stuff as well?

Hvall-Absolutely,I like to go back a rediscover the classics. those are my favorite bands to see live and its the classic bands that have inspired us from artwork to lyrics to production.

Wil-I think despite todays technology the older albums were more innovative in terms of how they experimented, like Jimmy Page and all of his micing methods, there was a fuller sound without pro- tools and all the plug ins.

Kvall-Exactly, simplifying things, rather than hiding behind technique and making things really solid.

Wil-So You guys are headed to the states as support for Melechesh, what part of touring the states are you looking forward to?

Hvall- Playing for people,there are some cities where they are very dedicated, places like New York, L.A and Toronto. I also just like to travel and travelling the states is always an amazing adventure.

Wil- Well, Festival season in Europe is coming up are there any big one you guys are excited about?

Hvall-We had to pass on some of the European festivals to play the states, though we are playing Brutal Assault , which is one of my favorites as it's in an old fortress and the fans there are extremely dedicated.

Wil-Its been a big week in metal as Jeff Hannemann passed. What would you say your favorite Slayer album is ?

Hvall- Show No Mercy, and Reign in Blood is a classic its one of those albums where 50 years from now when someone asks you to define metal you can point to that one, Though it might not be a popular choice i have always liked Hell Awaits.

Will= How big of an influence early on would you say Slayer was for you guys?

Hvall-Alot of influence as those albums came out as we had begun playing ourselves, bands like Slayer and Death are are the reason for me deciding to pick up a guitar.