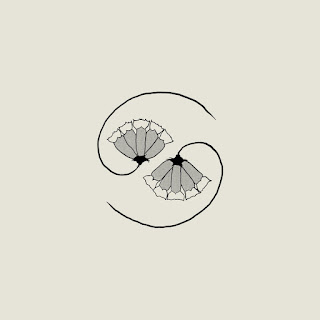 Been a minute for these guys. You can not mention post rock or any of it's sub-genre's without mentioning these guys. Sometimes they are more song oriented than others. There is always more of a cinematic quality to what they do. Considering they did the sound track for the 30 Days Later movies, it would make sense they might feel the need to score the current events of the world.  After a few minutes of  bubbling ambiance they do kick into some along the lines of Early Pink Floyd that glides along with more of a prog rock majesty than what might first come to mind when trying to gauge your expectations with this band.
"Fire at Static Valley" is almost more of an interlude in comparison to their normally sprawling arrangements at under seven minutes. It is moodier in the sense of atmosphere. More post rock ish than what continues to go down on "Government Came" that is more like drugged out Moody Blues. I am fine with them evolving into a more progressive rock band .  I guess depending on the scope of dynamics post-rock as a genre was half way there. I think on an album like this it is easier to see the connection. Pink Floyd had stuff that could have been the earliest post rock on  "Piper At the Gates of Dawn" so really this was the sub genre for hipsters who did not want to admit to liking the bands their stoner dads were into. In the last 8 minutes of the song it drops down really minimally almost too silence. It takes them about 3 minutes to build it back up into some almost more Hendrix like. Then the pull it all together for the last 3 minutes.
The last song is a meager six and a half minutes. The first minute is needed for them to turn their instruments to a decent volume. This kind of thing to me feels like they are checking their volume levels before actually playing. Since I do not do the kind of drugs I used to the ambient swells does not seem as much like a fully formed song. I will give this a 9. The last song sounds good but feels too much like krautrock . If you like what they do and like prog rock from the 70s then you will like this album as well, which is why it scored so well with me.
Posted by Wilcifer at 10:34 PM