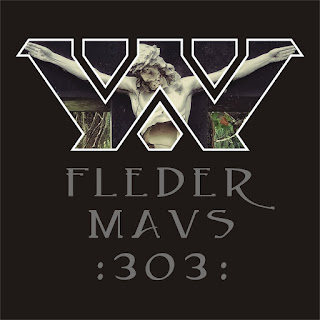 This project is sometimes more experimental than other times, but it is always dark which is what I really appreciate about it . I will have to say this album sounds even more German than what I have heard previously . By the 3rd song it is easy to see one again the illustration laid out before our ears as to how electronic music can become more about the sounds than the song. The third song has some sounds that are very pleasing to my ears but it just kinda drones off on those .  "Squeal Like a Pig" has enough samples to create a more interesting narrative and you know what kind of mood is being created here. I think it would be a great song for any dungeon .

The best song so far is "I am the Corona" . Where they take an amusingly menacing look at Covid. It is unsettling yet soothing. Though I think anything that is this tongue in check with it's jabbing at society is great.  The beats on it are pretty solid as well. 'Nein Nien " feels more like a song as well. In fact it reminds me of My Life With the Thrill Kill Kult" .   The pitfalls of this album are really no different than what I say for rock albums where the rule is Cool riffs alone does not a good song make. With electronic music it is cool beats alone does not a good song make.  This is not the case with "Little Wartz" which is escapes this is a the added layers and melodies are well... how you write a good song.

This last two songs are as German as the opener, though more focused on sounds and the droning pulse of melody. If I was tripping , which is what I used to do back when I listened to Wumpscut more , I had a deeper appreciation for the drone. When listening to this one the merits of songs it does not hold up as well. Super fans might get made at this , this is why I would ask, so you like a sound but not songs, what are you listening to music for ? I I will give this album an 8.5 for this reason. Granted that makes it better than your average electronic album for sure and fans should be pretty happy here.