Wolf King : "the Path of Wrath" 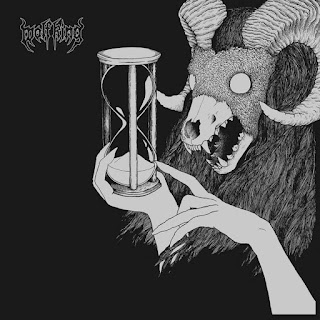 Today I was on a metallic hard core binge. After reviewing Bridge Burner's new one I was skeptical if this would measure up.. The first track changed my mind as aside from being extreme metal they are two different vibes. Where Bridge Burner was a death metal band with hard core influence, this band is more firmly black metal with only clues of their hard core past being, the way some of the riffs stomp. This is not uncommon with most American black metal bands, they seem to have come from a hard core background more often than not. I mean hard core stayed more underground after having it's day during the Myspace years and black metal has risen in prominence, though is not longer as trendy with the hipsters as it once was.  The only thing about this is it is easy for them to get caught up in there raging speed that it begins to form more of a uniform sound. A minute into the second song they snap out of it with a mean head banging riff.

The more hateful black metal snarl is layered with a lower death metal growl half the time. The drummer is pretty decent as he refrains from resorting to just blast beats. The are some Slayer like fills in places. Dynamically they rely on their riffs more like a thrash or death metal band. The over all sound is dense and oppressive, but without the evil atmosphere of black leaving the vocals as the most dark sounding element at times. That is not to say they are upbeat in any way.  This is a really well produced album it manages to have a full sound to create the feel of being rawer than it perhaps is. "Triumph of the Slain" is more straight ahead, with the Lord\s Prayer stuck in the lyrics.  "Sanctuary" is more straight forward , with a 1349 like fire to it's energy.  They shift the dynamics and bring in a clean guitar tone and singing in the background. No they are not turning into Dimmu Borgir. This was a much needed change of pace. It also makes it ok for them to go on bursts of blast madness since their is something to balance it out.

The rule here might be cool riffs alone does not a good song make, they challenge this on the title track. There is a fair touch of thrash here.  This adds the hooky edge to the riff. "Incantation" has enough nastiness and rough edges to remind me of Fistula. There are also moments that remind me of Kreator. Clean vocals join them on "Grief Portrait" to counter balance the screamed ones and the blast fest it starts off as .. "Beholder' starts off as such a speed fest, it is when it slows into a groove that I pay attention, though the verses as pretty thrashy. "Beholder' has more groove and is a more interesting song. There is more of a death metal feel on"Holy Serpent" as the album progressed the metal side eclipses the hard core influence. There are still stompy grooves.  It ends with a doomier note that works as the more deliberate pacing provides a dynamic contrast. I will give this album a 9, it was a nice surprise and more black metal than not, while not being the same ole same ole.