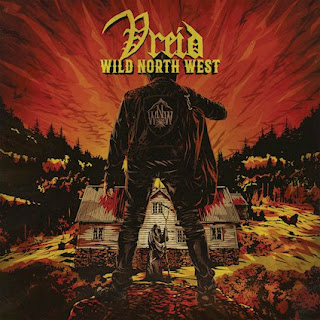 I used to be a big fan of these guys, I lost touch with them and skipped out on "Lifehunger". This might play to their favor as I missed the changes of their sound evolving into the more hooky almost rock oriented sound they have now. Even clean singing crops up on the first song. Yes there are blast beats and tremolo picked guitars so this is still very much black metal. It is my favorite kind of black metal as it is the kind that cares about song writing. In the past they had a touch of thrash to them, I am not hearing that as much here, though after some moodiness going into "Wolves At Sea" the blitz back with a more Windir like burst of speed. The guitar layered over it are more melancholy that what I recall from them in the past , and it is fair to say this album feels darker. The vocals feel like there is a more wretched rawness to them.
They continue to get more melodic with "the Morning Red" , which leads off with clean singing. The thrash influence comes back big time with "Shadows of Aurora" . It is the kind of gallop that reminds you why you love metal. "Spikes of God" is a buzz of black metal that is not as impressive after the range of style and sound they have shown earlier in the album that makes this feel more obligatory. Holy shit "Dazed and Reduced" sounds like Judas Priest meets Alice Cooper. In some ways it makes me also think of In Solitude , but in the best ways possible it is a great song. "Into the Mountains " has more melodic elements not as much as the previous song and leans more into the black metal side , not as inspired but still pretty solid. They do experiment at the ending. Keyboards play a larger role on this album than I recall ever hearing before. This allows them to depart from metal altogether in places.
The last song finds them more in Tribulations zip code, Even with the Organ intro they are not as goth tinged as Tribulation , though things like piano interludes have that feel. What I like about this album is the fact they are not being like AC/DC or Cannibal Corpse and just dialing in the predictable sound and take some risks . This album's strong point is when they do not conform to the expectations of black metal and do their own thing. I will give this album a 9.
Posted by Wilcifer at 7:53 PM