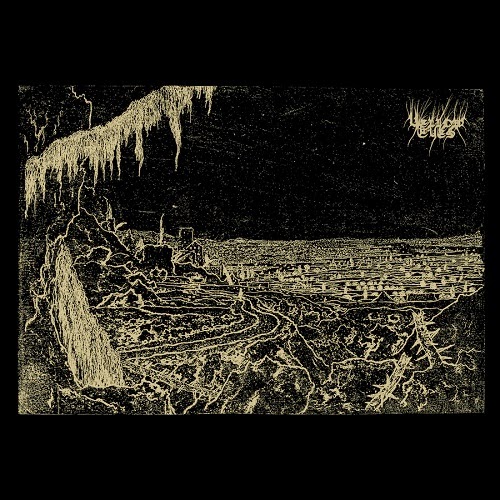 Catching up on all of this years releases, I checked out the newest from a band I have given a chance before, Yellow Eyes. This is the New York bands' second full length. The three piece continues to play a raw and reckless style of black metal, not far removed from what Fell Voices or Ash Borer once did, but rougher around the edges and without the ambiance of the drone. This album is less hypnotic than what those bands are doing now, and less refined as well.

After the initial spastic blast, there is some breathing room as things get darker and more melancholy than the rabid dog that started off the album. "In this Stillness" has a clamor to it but tempered with rusty chords that ring out.The snarl of vocals is lost in the mix but audible enough to know its there. They blast back at you for every breathe you are allowed to take. By the end of this song it begins to become a blur , so even after the acoustic outro going into the dissonant storm " Many Long Fingers Bent in Pain"you are still a little blast drunk. There are some ugly sonic chords being bettered about , almost in a similar manner than Liturgy once did, but the ring out less.  The songs run around six minutes so they are not as sprawling as what Fell Voices undertakes. The beat straightens out in more of a sailing gallop at times and gives the blasting some dynamic space.

"Ice Knell" doesn't waste any time launching back into the blast.After the first minute at that speed they hand on the chords long enough to get a breath in an throw themselves back into the tornado. With the lo-fi recording ,which captures more chaos than cvlt, their momentum makes some moments hard to decipher, with punches and accents left to break the riffs up.

The title track starts off with acoustic guitar, that feed back begins to form like mold underneath , before its back to the blast.The drumming is the most impressive element , though the guitar has its moment in the sonic fray. They have created a claustrophobic clutter, that can be noisy, though they do let an occasional darkness bleed through the wall of noise.

The album closes out with "Cabin Filled With Smoke and Flies" where the riffs are still dissonant and mean , but not finding any new ground, though there is a pretty heavy chug a minute and half in before they fall back into the blur of  blastiness. The song does end one a pretty good note, where their is a better sonic balance , but I wish this had been more of the albums themes. If you like your black metal really raw and sonic then its worth a shot, I like my black metal a little darker and more dynamic. I'll give it a six because they are good at what they do, I would like to hear this more fully realized.