Up From the Underground : Stoney " More Than Animals 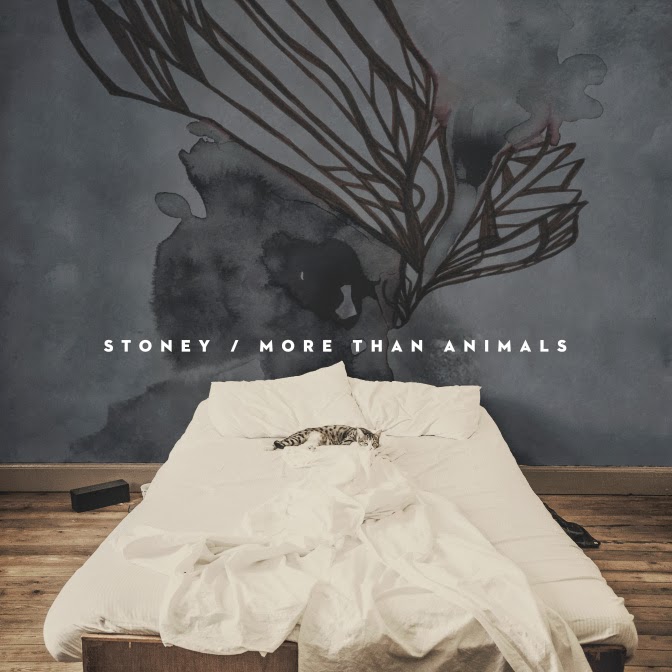 Singer songwriter Mark Stoney could be called a Brit pop artist , but such a description would not fully encompass the scope of ground covered on his newest full length "More Than Animals." He manages to find common ground with bands like Arcade Fire and Flaming Lips, in  this lavishly crafted indie rock flourished with Sgt Peppered Orchestrations.

He spared no expense on the lush production that finds him occupying a middle ground between electronica and organic indie rock, the thick synth fuzz to bass lines of songs like "the Score" would appeal to fans of  Bloc Party and even moving into the dirtier dance territory of the Faint, when the beats crescendo with the build of the song.

Stoney possesses a voice of his own, quirky but capable of floating into falsetto laced harmonies. There are plenty of thick layers of choral vocals chiming in for every corner."Defiantly Loved" is the first song where the verse holds traces of his relocation to Texas, as the guitar twang  more and the song carries a lazy gallop into the sunset.

One of the  biggest stylistic shifts occurs on the song "We Belonged" where he strips everything down to an acoustic guitar and builds it back up from there. Of course I'm partial to when things take a darker turn on "Devil on My Back", which takes an ominous flow down the river Styx, but their is still an up beat cadence to the vocal phrasing and an almost funky syncopation set against, the oohs and aahs of the backing vocals, It is in moments like these where his true voice is found and it's most apparent he has really created something unique.

Stoney takes all of the redeeming elements from modern alternative radio and mixes them together to make this work. The angular groove to "House of Mirrors" strikes a brilliant balance of indie rock swagger and jangle, but keeps it moving with his sixth sense for creating riveting beats.  His most compelling  moments occur ,when he brings it back down with a song like "Bedpost" and strips away all the smoke and mirrors of pro-tools production magic to let songs like this stand on their own two feet. Sure he builds it back up into his trademark sweeping grandiosity, with layers of psychedelics beneath him, but the fact he can capture the range of dynamics out of a stripped down melody is the most telling. Because a big sound can be produced , but good song writing can't be faked.

The albums ebb and flow continues on a Technicolor roller coaster from the very Beatles like waltz of  "Let it Go"  that soars over strawberry fields, before the intimate beginnings of "Albatross" Mark singing up on the mic in a more restrained hush.There's a feeling that evokes Gotye's earlier electronic work in the opening groove of "Cock of the Walk", but once it hits the chorus the song morphs into a glammed out strut of its namesake.

The sleepy folk of  "Wanderlust" borders on being a lullaby, but rather than lulling you the melody keeps the listener engaged. The almost Everlast flavored blues funk of "Round Here" comes as an unexpected close to the album. Overall expect big things from Stoney, he has the song writing smarts and the ear in the studio to craft a wide array of compelling sounds.