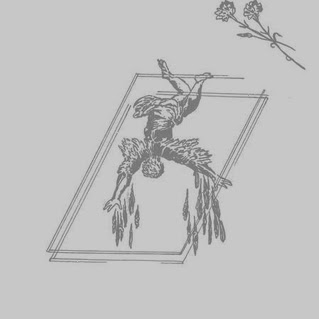 This California duo is a very intriguing mix of influences there is a much metal mixed in as their is droney shoe gaze, but not in the same manner that say Alcest blends the two.There is more doom to them , so much the label doom-pop is often applied. The lazy melodies of the too hip to care vocals keep these riffs from dragging and accent the spaciousness. On the title track the guitars continue to ring out with a fuzzy warmth allowing the vocals to keep up their slacker swoon over the rest of the song. The guitar riffs are pretty interesting on this album, no math rock, just catchy smart playing.

One of the albums heavier moments is when the song " Here For Now" lurches out of the feed back, the drums are hit with determination as the riff drones on, building up into the chorus. I liked this sort of thing back in the 90's so its charm is not lost on me. "Indifference" is slow and lumbering but sonic like a more relaxed version of Hum.

When the tempo picks up on" Lost of Phrases" it brings the more indie rock elements to the forefront, with the bass and fuzzed undertones of guitar to do most of the heavy lifting as the rest of the song, strolls in the same neighborhood as say Sebadoh. The crawling dreaminess of "New Light" reminds me of the first Remy Zero Album. The vocal lines are simple but effective.

The opening to "Old Light" finds the guitar with a little more twang to it, before it stumbles into one of the albums heavier moments with the grace of Jesu. "Safe Below" almost has too much space and lacks the same magnetism the other songs are held together with. Its not until the build in the songs final two minutes that it seems to pay off. The album ends on a much more straight forward note than , I expected, "Want of Denial: isn't a bad song, its just comparison to some of the tightly written songs earlier in the album it feel a tad like the easy way out.I will round this one up to a 9.5 , because even though I have heard this sort of thing before it has been a while and these guys do it well.