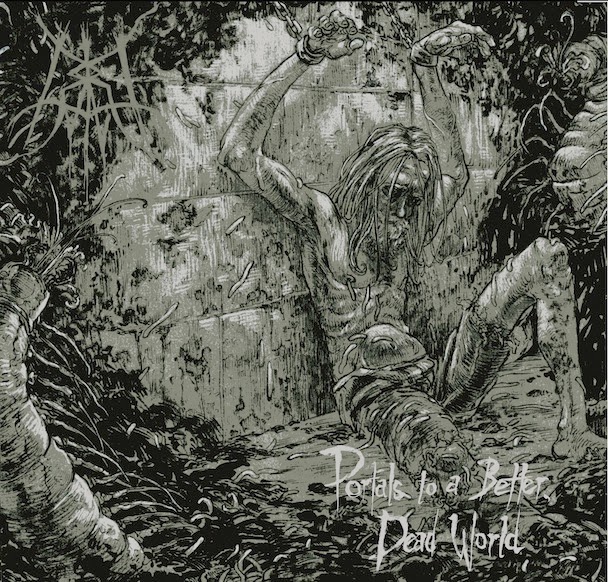 This two man project out of Texas, caught my attention with the hype they were getting around the blog underground, and they are one of the few acts that lived up to the hype. They defy labels accept for metal, though have the most in common with the more out of the box brand of American black metal, like Woe and Liturgy. There is a black metal sneer to the vocals , but the music has a more punk propulsion. But even when i say punk, its the more indie rock snarling style that is coming up these days rather than Black Flag.

The angular ring to the guitars of "Closing Doors" make me think of Litugy, but these guys are much less apologetic for being metal. Just because they add math to the acrobatics doesn't mean their is a lack of teeth.They don't let the frantic momentum hinder them from writing smart songs either.

The Converge influence I  suspected doesn't become more apparent until "Red Moon Foreboding" . The riffs retain the similar balance of unhinged chaos in their angular attack. The vocal at times go into more of a hardcore bark, that goes more core than not when the song builds, but even for black metallists I don't consider it a band thing ,as it 's good music and works with where the tempest is blowing the song.

The back off to build the mood on "Dust Collector" , the guitar takes a cleaner tone and the builds up into more of an indie rock jangle before taking off , when it does this moment a few other sprinkled through the album, I guess could be called screamo, but they remind me more of when emo wasn't about hair cuts but referred to bands like Appleseed Cast and Planesmistakenforstars, the playing continues to ebb and flow through this dynamic, but has a disjointed ugliness even in the tenderness.

The Converge like feral explosion marries black metal to whatever type of core you would refer to Converge as , I suppose metal, as it is more metal than punk in its intent. This is one of the more straightforward songs on the album as the tempos are more in your face with less jerky math. Then from there the album gets darker and explores a wider dynamic range.

The bass drives you into "Exalting the Shadow Proprietor" which stomps in with a death metal like feel to it, the chords are darker , more ominous and more metal.The bass line is the only element that doesn't seem like they are just trying on their more metal hat, as it does somewhat discard the identity the band created for themselves until the more jangly guitar comes in behind the solo. The lower vocals are cool for the fact the singer stays in the same screaming rage up until this point.

The album's darkest and moodiest moment comes with "3,580 lbs" that closes the album out, the songs breathes allowing space, in a similar manner that Blut Aus Nord does, clean vocals seep in through the empty spaces, the growls are lower in more of the singer's death metal register.The solo at the end of the song is really well written. I'll give this album a 9.5, the only thing keeping it from being perfect, is I was not a hundred percent convinced of the metal hat worn in "Exhalting..." and the song before that one is a little to straight forward and could have used more of their personality, but other than that this is a wonderful album that lives up to the hype.