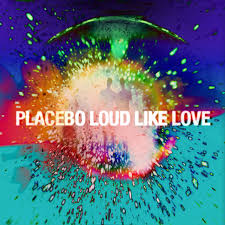 A big fan of this band for well over a decade now but can't say I was too enamored with their previous album "Battle For the Sun" which seemed bland and a little too middle of the road. I was unaware this album was even coming out so it was a surprise when I across it. I believe it's getting a September 16th release in the States. The opening title track was a little daunting because it gave me flashbacks of the direction they went in on "Battle For the Sun" and I feared Brian had sobered up and lost his touch. Fortunately the rest of the album proves this isn't the case, though it does lack the drugged lamentation feel of their older work.

To say the song " Love Like Loud" is bad is  an overstatement it  comes to close to being banal radio rock for Placebo. "Scene of the Crime" is more on par with what is expected of the band. It's driving with the glam edges, the other layers in the sound , namely synths add to the sound rather than take away from it.

The lyrics have always been the bands strong point and the winks are some what blatant in the stabs taken at social media on "Too Many Friends". Brian isn't taking himself too serious with the opening line " My computer thinks I'm gay / I threw that piece of junk away".  The chorus is big and bright , almost too happy for how I prefer these guys but the other components make up for this.

At the onset I was concern that perhaps Brian had gotten sober and lost his touch as the songs lacked the certain brooding sardonic shadow side than begins to show it's smirk on " Hold Onto Me". In some sense he can't win for losing as by "Meds" the ballads about chasing the dragon had begun to get contrived, but with out that strung out yearning and the sense that his make up is tear streaked. But one of the albums strongest tracks "Rob the Bank"  recalls every element that made the bank great to begin with. The lyrics are smart and the hooks have an edge to them , while the guitar expands its sonic reach beyond the norm for commercial rock.

The piano accompanying "A Million Little Pieces" doesn't burden the rest of the arrangement and helps it to move as fluidly as when the band used similar elements on "Sleeping with Ghosts". Brian's voice also feel most comfortable here as the Geddy Lee like pitch to his often nasal tenor was bound to not age well, though he has handled it admirably even here, though the first signs of strain are showing as his youth isn't immortal, yet his singing style hasn't lent itself to change like say David Bowie's and was bound to face it's mortality.
The build on "Exit Wounds" finds his voice sounding as androgynous as ever but the more electronic sweep of the songs lends it self more readily to his delivery.

The albums final act maintains it's momentum even getting back to a familiar dark bleakness of contemplation on"Begin the End" that find the guitar being just as lyrical in its phrasing as the vocals. Though it seems the album goes out on a slight whimper with "Bosco"  though it's a better song than title track which opens the album but is nonetheless a piano ballad even though the lyrics go back to his self deprecating addictions this time its narrowed down to just drinking. This album  restores faith in the band after the last one and for the most part is pretty damn good so I'll give it an 8.5 though they have released 10s for most of their career so its bittersweet.